Judge Napolitano: Does Obama Wait For Congress To Be On Vacation To Break The Law? 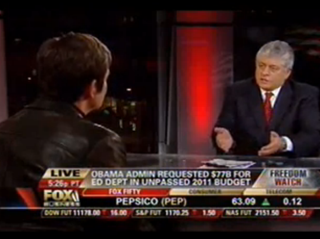 Judge Andrew Napolitano sees something suspicious in the timing of President Obama’s major executive announcements: they seem to happen whenever Congress isn’t in session. On last night’s Freedom Watch, the Judge and Reason.tv editor Nick Gillespie debated the relative constitutionality of President Obama’s proposed No Child Left Behind overhaul and agreed– it’s about as constitutional as our “kinetic activities” in Libya, and also announced when Congress is on vacation.

Judge Napolitano seemed a bit perplexed at how the President’s voucher proposal without Congressional approval would meet the requirements of the Constitution, asking how the President would be able to get away with it. Gillespie retorted that he would likely in “the same way he got away with not consulting Congress about bombing Libya.” Comparing President Obama to President Bush, Gillespie noted that he was “following suit in a lot of ways” with the Bush doctrine of “excessive use of executive power and just trampling the Constitution.” He added that, in this specific case, it was worth noting that “No Child Left Behind is a terrible law in virtually every way,” so a reform may be helpful but, as Judge Napolitano added, the real problem was the federal government involving itself in K-12 education at all.

Then the Judge proceeded to continue to link Libya to the No Child Left Behind proposal. “He announced this today,” he noted, “Where’s the Congress? On vacation? When he bomed Libya, where was the Congress? On vacation. Is this a new pattern?” Gillespie wasn’t as quick to blame this on the President, instead accusing Coungress of “not holding to their constitutional obligations” by making the President stay accountable to them. “Maybe the problem is that Congress is taking too many vacations,” he added, though on a serious note warning that the growth of executive power was, according to him, facilitating America’s “rapidly becoming a banana republic.”