Keith Olbermann: The Tea Party “Snake Is Perpetually Eating Its Own Tail” 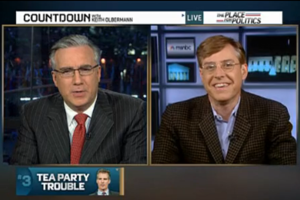 The backlash against Massachusetts Senator Scott Brown, considered by some to be the first elected Tea Party politician, has Keith Olbermann worried about the state of the movement. After all, if Tea Partiers are “officially defriending” Brown on Facebook over financial regulation, what hope does any other Tea Party politician have, and if the Tea Party is inherently opposed to elected politicians as a whole, then won’t they always be against the people they elect as soon as they are sworn into office?

Olbermann described it as the “snake perpetually eating its own tail,” such that the Tea Party will eventually run out of elected officials to put in office and hastily dispose of. Not to mention, he continued, that he perceives the movement is slowing down, with the unexpected rise in the polls of Senate Majority Leader Harry Reid in Nevada and the Republicans’ inability to win the special election in Pennsylvania last week.

And while his guest, Wall Street Journal columnist Thomas Frank, agreed with the premise that the Tea Party does not stably support its own politicians, he added that, contrary to what might seem the inevitable result of it, the tactic is working. “The conservative movement has this sense of themselves as forever being played… [and] to a certain degree, it’s true,” he noted, giving as an example the rhetoric from politicians supporting the religious right and how little legislative action there is on those matters once they are elected. Wall Street, he added, is a different story– “they always get what they want”–but warned that the backlash against elected Tea Party sympathizers was a product of the way the system worked, and not a symptom of a problem within it. “It seems ridiculous,” he concluded, “but they are very effectively pushing the Republican Party to the right. Look at the situation that were in now– that’s an amazing achievement.”

Video of the segment, from last night’s Countdown, below: