Keith Olbermann: Why Is Dick Armey Telling GOP Candidates To Keep Away From Tea Partiers? 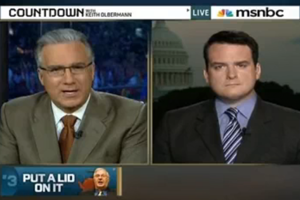 On last night’s Countdown, Keith Olbermann took on comments from conservative jack-of-all-trades Dick Armey advising Republican congressional candidates to steer clear of the Tea Party movement, even if they agree with its members, lest they end up like Rand Paul. What does it mean for tea partiers, he asked, when the plan for GOP congressional candidates is to keep their affiliations with the tea partiers a secret until after the elections?

The Washington Post‘s David Weigel, who was on to discuss the comments with Olbermann, posited that it was a sign the Democrats’ attempts at marginalizing the movement were working, in the sense that Armey “sees, and I think a lot of Republicans see, that Democrats have tried to find the most extreme elements of the Tea Parties and make them politically toxic.” And, to a certain extent, it has worked enough that the Republican Party feels the need to maintain a distinct feel than the Tea Party. He also noted that it was interesting that Armey was still considered a wise voice on the right and, although he may have sounded like he was wary of the Tea Party movement today, “he is one of the few Republican politicians that the tea partiers take seriously” because he was not a prominent figure during the Republicans’ early-2000s neo-conservative phase.

The rest of Olbermann’s Tea Party roundup touches on Nevada Republican Senate candidate Sharron Angle‘s past comments and today’s round of apologies and meta-apologies from Congressman Joe Barton. Video below: