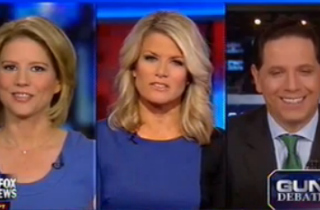 During a political panel of America’s Newsroom this morning, Fox liberal contributor Kirsten Powers went head-to-head with GOP analyst Tony Sayegh over the effectiveness of universal background checks for gun owners, with the latter suggesting that liberals “malign” gun owners by implying they aren’t already focused on gun safety.

Sayegh agreed with much of what NRA CEO Wayne LaPierre said during his Fox News Sunday appearance, adding, “You need the mental health lobby to join in this. You can’t just have universal background checks and not modify the HIPAA laws to have mental records centralized so when you cross-reference them you can make sure you’re not giving somebody who is mentally ill a gun.”

His co-panelist Powers took a different position: “When they refer to the mental health lobby, he was talking about universal background checks. That is not the same as committing somebody. That is a legal issue. If the mental health lobby is what he says is causing problems then they just need to be ignored. The issue is the lawyers like the ACLU who make it difficult to commit people, and those are two completely different issues.”

She continued: “I would say what could have prevented this crime in Newtown would have been if [Nancy Lanza] had her guns in a safe, which is what responsible gun owners do — they keep their guns in a safe locked away or at bare minimum, in a closet locked away. She had an unstable son, she should have hade them in the state. There should be laws that state: If you’re going to own a gun, keep it locked away and if it’s used in a crime you will be held accountable. In this situation she was unfortunately killed, but the idea that you just have guns laying around your house; somebody could break into the house and steal it and use in it a crime.”

“Legal gun owners are by far the most focused on gun safety,” Sayegh responded. “Let’s remember that fact. We can’t malign a group of people who rightfully…”

“I didn’t just malign gun owners,” Powers shot back. “Don’t say that. My family are responsible gun owners and they keep their guns in a safe.”

Sayegh responded by saying he doesn’t believe Powers maligns gun owners, and moved on to say that “background checks are a good first step,” but the president’s opinion on so-called “assault weapons” is “overreaching.”

Host Martha MacCallum eventually interrupted to try and corral the conversation back to mental health, saying, “The problem is not guns in general, the problem is that when guns fall into the hand are people who are mentally deranged which every single one of these situations involves as you go across the board.” She asked: “Why isn’t that the focus of this conversation?”

She then brought up Sayegh’s earlier remarks: “Instead, I have people claiming, ‘You’re maligning gun owners because you want to have background checks.'”

“I don’t think anybody said that,” MacCallum interjected. Sayegh agreed.

“Look, we actually agree, and I think even the majority of NRA members agree,” Sayegh said. “We want universal background checks to make sure the information is in that to cross reference that relate to mental health laws.” However, the conservative guest said, we are not talking enough about “securing our schools, malls, movie theaters, the soft targets where cowards with guns, mentally ill people who choose to exact their anger on society with guns, they go to them because they know they are not protected.”

The two guests then talked over each other after Powers told Sayegh that “you’re presenting it like the NRA is so reasonable, and they are not reasonable,” before MacCallum interrupted to end the discussion.