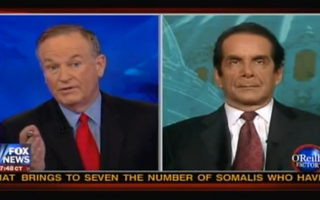 The shift in media power in the past couple of decades– as exemplified by his election as the most trusted news personality on TV– has had Bill O’Reilly fascinated all week, and tonight he brought on Charles Krauthammer for further commentary. Krauthammer’s explanation for Fox News’ success happened to coincide with his explanation for why the Democrats’ campaigning has become so “scurrilous”: “America is a center-right country… not conducive to a liberal message.”

O’Reilly began the segment by asking Krauthammer how much of an advantage having the media in his pocket was entering the 2012 election cycle. Krauthammer didn’t seem particularly worried about the perceived bias. “The left, the Democrats, always have the press on their side,” he explained languidly. “They’ve had it for forty years. Nonetheless, the Republicans have won the presidency seven out of the last ten elections.” That said, O’Reilly argued that they were losing their grip on the country, which Krauthammer elaborated that, instead of the media, “what conservatives have is the country. It is a center-right country, it has remained like that for almost four decades.”
How will that impact the 2012 elections? Krauthammer predicts the politics will get very dirty, very fast. “Democrats have already prepared dirt-digging on Governor Chris Christie,” he argued by way of example, “who isn’t even a candidate.” He also pointed to “these truly scurrilous ads” depicting Republicans literally throwing old people off cliffs.

Krauthammer did not express any concern that that would put a dent in the right-wing vote, though, particularly due to the rise of Fox News. O’Reilly asked him to evaluate why the network was such a success, to which he replied that while they spread a message “anathema to the liberal elites,” they were able to harness the demographic power of conservative views. “What I’ve always said about the genius of Roger Ailes and Rupert Murdoch,” he explained, “is that they found a niche… that is half the American people.”