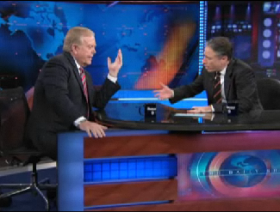 Lou Dobbs was on the Daily Show last night, in an interview that skirted lightly around the reasons for his split with CNN, despite welcoming Dobbs to the set with a Mariachi band. Beyond that unsubtle wink, however, and beyond calling Dobbs’ views “abhorrent and wrong,” Stewart didn’t really challenge Dobbs on the disquieting race-related issues about his show (TV and radio, actually) regarding immigration and, this past summer, the whole Birther frenzy. Instead they talked a bit about CNN, and then got into a rather interesting and nuanced discussion about why certain factions seemed to be in such an Obama panic, why policies resulting from duly-won elections weren’t tyranny (or at least weren’t tryanny when Bush and Cheney did it!), and where all the reasonable people were in these debates. It was actually the first time I thought that Jon Stewart could run for office and win. Also, Sarah Palin will never come on his show.

But back to Dobbs. He defined his departure from CNN as being about “advocacy journalism” and said that CNN president Jon Klein had told him that the network was moving away from advocacy journalism to “middle of the road journalism.” Said Stewart: “Are you sure it wasn’t adult contemporary journalism?” Ha. More:

STEWART: Is that the issue at CNN that they are trying to create a gray, flavorless environment…because in this environment, you have to take a position. Maybe it’s not liberal, maybe it’s not conservative, but it has to be for authenticity or something.”
DOBBS: All I can say to that is, you seem reasonable in that analysis and Jon Klein is the man for you to talk to.
STEWART: Boy this contract has you by the balls, doesn’t it?

DOBBS: The reality is, that they wanted to go in one direction – I understand and appreciate that.
STEWART: No, I see the direction they’re going in. It’s called down. 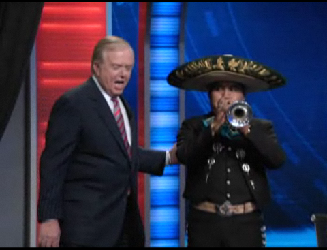 He also, disappointingly, did not mention the reasons why except for the previously-mentioned nod to abhorrent wrongness which he managed to spin in a positive light (“Your views, however abhorrent and wrong, have always been consistent”). As a side note, I found it interesting that on the Daily Show page there is a sidebar of Stewart’s “Takedowns” including Jim Cramer, Bernie Goldberg, Chris Matthews and Betsy McCaughey. Considering how many people he has on his show, that’s a pretty slim list, of people who were pretty safe to take down. Then again, had Stewart been more aggressive towards Dobbs he might not have been able to have the interesting discussion that followed, which ultimately was probably more productive in exploring and exposing these trends and movements rather than Dobbs clamming up angrily under a harsh interrogation. But then again that’s journalism. But then again, Stewart never claimed to be a journalist. But then again — too bad, a rose by any other name etc. So who knows. Stewart (and Colbert) go for — and expose — the jugular in subtle, often Socratic ways, which are usually effective in discrediting the arguments of their adversaries, when the show is adversarial.

Back to Dobbs. It wasn’t an angry confrontation, but a reasoned debate, which I appreciated — especially Stewart’s rather crucial point distinguishing elections from tyranny: “They’re confusing losing an election with tyranny. It’s not the same thing. When people get elected that disagree with you, chances are the policies they pass won’t be in your wheelhouse. That’s not tyranny.” Responded Dobbs: “I think the Democratic party is confusing winning an election with winning a nation.” Huh? Stewart said the same thing, reminding Dobbs that Vice-President Cheney had said that winning an election meant 50% plus one. More:

STEWART: We’re not a fragile country. This idea that getting a health care plan through takes us back to the days pre-Revolution is bunk. There’s a fear out there that seems irrational.
DOBBS: I think that part of that fear certainly is. I also think part of that fear is simply catching up with the events of some years ago, say four or five years ago. I truly do.
STEWART: Why do they always catch up to the fears during Democratic administrations?…It feels like all those people who want limited government really just want government limited to Republicans.

Dobbs said that “government functions best when we govern from the center”; Stewart wondered where all the reasonable people were in the crowd holding up Dachau signs. It’s a three-segment interview — the on-air version was over 8 minutes long, and the extended web interview runs just over 20 minutes — ample time for Dobbs to make his case. It was also plenty of time for Stewart to, in my estimation, prove it utterly wrong. Watch them all for yourself on the next page and see what you think.

>>>VIDEO: LOU DOBBS WITH JON STEWART ON THE DAILY SHOW