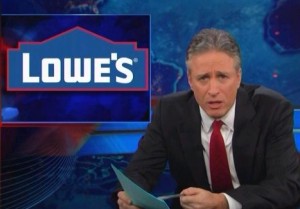 TLC’s new show American Muslim has garnered some controversy after the Florida Family Association drove the hardware store Lowe’s to boycott the program– not because it depicted images of violent fundamentalist Muslims, but because it didn’t. On tonight’s Daily Show, host Jon Stewart tried to make sense of both the complaint and the boycott, while “senior Muslim correspondent” Aasif Mandvi called for a boycott, not of the program, but of Lowe’s, for selling everything anyone would need to put together a primitive bomb.

“Who gives a jihadi terrorist cell a show?” Stewart asked, expecting the show to be about “jihadi propaganda.” Instead, he found “the most boring reality show alive” featuring “Muslims living their lives like the rest of us fucking idiots.” He then took a look at the complaints from the FFA, which appeared to be that they did not depict Muslims as radicals. “This show is harmful education-wise to your belief structure,” Stewart asked, “is that not the purpose of education vis-a-vis relief structures, to replace your belief structures with facts?”

With that, he went to Mandvi for more, who was reporting “live” in front of a Lowe’s and calling for the company to be “shut down entirely.” “If we’re serious about fighting terror, we have to cut off their supply chain– I mean, Lowe’s.” Declaring that “all Muslims are terrorists, each and every one of them, bent on world domination by violent means,” Mandvi asked Stewart to list the items needed to make a bomb, and noted that they were all available in the hardware store. “Without the store Lowe’s,” he concluded, “the jihadist goal is unachievable.”

RELATED: Russell Simmons Offers To Buy Up All The Remaining Ad Time For TLC’s All-American Muslim

The segment via Comedy Central: