Matt Taibbi: Journalists Do Not Think Election Will Be Close, Only Say So To ‘Sell Advertising’ 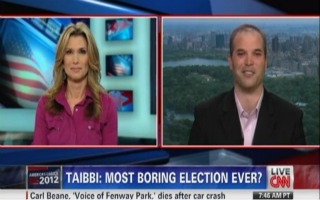 Matt Taibbi, contributing editor with Rolling Stone Magazine, appeared on CNN on Thursday where he discussed the state of the presidential race. Taibbi said that, of the journalists he associates with, there is a feeling that President Obama has already won the 2012 election. There is a “relatively popular incumbent, the economy is not doing terribly,” and the only reason the press suggests the race will be close is that “we have to sell advertising.”

[Barack] Obama versus [Mitt] Romney is the worst reality show on TV since the Tila Tequila days. The characters are terrible, there’s no suspense, and the biggest thing is, it lacks both spontaneity and gross-out factor.

“If you noticed, that was really Joe Biden who injected that little plot twist into the race,” Taibbi said. “Yeah, I guess there’s going to be a few controversies here and there but really it lacks the same kind of thrills we had four years ago where it seemed like every week there was some new crazy controversy – from Rev. Jeremiah Wright to Geraldine Ferraro to Bill Ayers. It was something like that every week, and we’re just not having that this time.”

“I don’t think you could ever top the election in 2008,” said Costello.

Taibbi agreed, “It was fantastic.”

“The race is neck-and-neck. Are you suggesting the race is at a virtual tie simply because the voters are bored right now,” asked Costello.

I saw that poll – I don’t believe it. I don’t know any campaign journalists out there who thinks that Romney has a legitimate chance to win. And I’m not making a value judgment about any candidate. I just think that, in the press, there’s this general feeling that this election is a foregone conclusion. You have a relatively popular incumbent, the economy is not doing terribly and traditionally – especially the candidate who has a fundraising advantage – almost always wins.

“Could Romney win, yes it’s possible. But I just don’t think it’s likely and that takes a lot of suspense out of the race,” Taibbi conclude.

Costello noted that Democratic Strategist James Carville just addressed this sentiment among many democrats. She said that Carville thinks that level of complacency is dangerous because Democrats could lose. Taibbi said that the media does not believe the election will be close, and they are only advancing this narrative in order to drive ratings and sell advertising.

That’s possible, but one of the things you have to remember – and I think we in the media, we all get caught up in this – there are very few political taboos left in American journalism, but there are a lot of commercial taboos. One of the big ones is you can never say that something is a foregone conclusion. It’s our job in the media to try to drum up interest in this. We have to sell advertising, we have to get viewers and get ratings. We can’t just come out and say that this thing is over six months before it happens. So, there is a strong incentive among all pundits, including me, to come out and say, ‘this could happen, that could happen.’ Romney has a legitimate chance. It’s just a subconscious pull that works on all of us in the media that drives us to make those kinds of comments, I think.

Taibbi concluded saying that he believes this election most closely resembles 2004, in that the incumbent is likely to win a narrow victory in November.