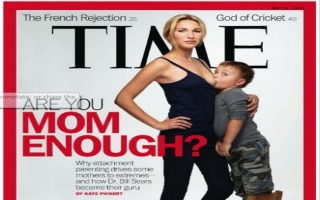 The “mom wars” are in full swing; they join gay marriage, birth control and 1970s-era toys as the latest in election year non-issue cultural battlegrounds. If Democratic Strategist Hillary Rosen’s comments in April represented the “mom wars” version of the firing on Ft. Sumter, today’s salvos are the Peninsula campaign – a brutal and ultimately failed assault that heralded a long and bloody war. The latest volleys were launched by both Republican candidate Mitt Romney’s wife Ann, who wrote an opinion piece in USA Today celebrating motherhood, and Time Magazine’s releasing a sensationalist cover piece showing a young mom breastfeeding a boy well beyond toddler stage.

The lead article in Time with the cover image of an “achievement mother,” takes on a new age of parenting in which breastfeeding long after toddlerhood is celebrated and kids are encouraged to sleep in the “family bed” into their schooling years.

The Blaze notes that Time’s piece examines the state of experimental parenting – much of the article is, however, only available to subscribers:

The cover goes with the magazine’s feature story on “attachment parenting” — a philosophy designed to foster a secure bond to the child. Co-sleeping, or the “family bed,” and breastfeeding well past babyhood are sometimes the hallmarks of attachment parenting.

The mother pictured on the cover is Jamie Lynne Grumet of Los Angeles and her 3-year-old son.

“I don’t consider breastfeeding immodest at all—I’m not shy about doing it in public,” she told Time.

Meanwhile, Ann Romney’s op-ed, “Three Seasons of Motherhood,” seeks to reassure new mothers by relating her own fears and her experience as a daughter and attempting to emulate her upbringing for her five sons.

“The day my first boy was born I felt woefully unprepared,” writes Romney. She writes about her experience losing her mother to Ovarian cancer, and the happiness she felt when her many sons took wives and added some daughters to the Romney family.

Cherish your mothers. The ones who wiped your tears, who were at every ball game or ballet recital. The ones who believed in you, even when nobody else did, even when maybe you didn’t believe in yourself.

Women wear many hats in their lives. Daughter, sister, student, breadwinner. But no matter where we are or what we’re doing, one hat that moms never take off is the crown of motherhood.

There is no crown more glorious.

Lest you think this article is not political, watch this Restore Our Future Supers PAC ad which attacks Romney’s critics and highlights her “mom-ness.”

Ann Romney publishes a rather gauzy, pre-Mother’s Day portrayal of maternal tradition. All that’s left is a warm slice of apple pie and you have the genesis of the American ethos down. What’s not to love?

Well, for Atlantic Magazine editor, Garance Franke-Ruta, no statement is non-controversial enough to be beyond criticism:

Ann Romney’s op-ed boo-boo: “There is no crown more glorious” than motherhood. She really wants image of her w a crown? usat.ly/KT2c1m

So went the latest engagement in the “mommy wars.” I think it’s fair to call it a draw.

Furthermore, unemployment claims dropped by 1,000 claims from the previous week, the lowest since March. That said, they are still at 367,000 new claims for the week ending May 5. One would think such good news for the Obama administration on the economic front would merit some focus – unless, that is, it would take voters focus off the culture wars they have fostered since January and would force voters to actually take stock in the state of the economy.

Hey, did you know that the United States’ reached a milestone trade deficit today, hitting $51.8 billion or 14.1 percent? If you did, you are what they call a “reader” and are not welcome at the debate table, thanks very much.

Given these facts, it makes more political sense that we have a national conversation about the virtue of breastfeeding.