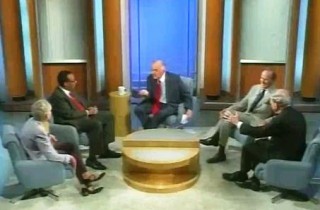 The McLaughlin Group descended into chaotic crosstalk Sunday morning when the panel debated the merits of Mitt Romney‘s selection of Rep. Paul Ryan as his vice presidential nominee.

The chaos began when panelist Eleanor Clift criticized Ryan as “the architect of the Bush Social Security privatization scheme. He also wants to eliminate all taxes on capital gains, wants to increase the defense spending. And this is all going to be accomplished with these unspecified cuts. Where are those cuts going to come from?”

Host John McLaughlin seemed to take this as Clift questioning Ryan’s fiscal consistency, asking her pointedly, “Do you have any doubts of the fiscal erudition of this man, Ryan?”

The camera then cut to various other panelists talking over each other, wagging fingers. Pat Buchanan insisted “he is erudite,” while Clift declared that “he is a zealot with a philosophy based on Ayn Rand.”

“What’s wrong with Ayn Rand?” McLaughlin asked over the mess of crosstalk. “Are you talking about the fact that she was an atheist?”

“She doesn’t believe in government,” interjected Clarence Page, again with all four other speakers shouting over one another.

Mort Zuckerman then tried to calm the discussion down, by saying that “the fact the deficit that we have represents a mortal threat to the american economy the next several years,” adding that regardless of what you may think of Ryan, he is “very serious” about solving it.

However, once McLaughlin asked the group about the way Ryan plans to handle Medicare reform, the panel returned to chaos, with Clift shouting that his plan is a “fraud,” and voices raised for the next few minutes without a single person getting a full sentence in without being interrupted.

Old political experts arguing like a family over the dinner table. Lots of fun. Watch below: