Media Twitter Blows Up Over Ben Smith’s Outing Tucker Carlson as a Source: ‘Messy B*tch Who Lives for Drama’ 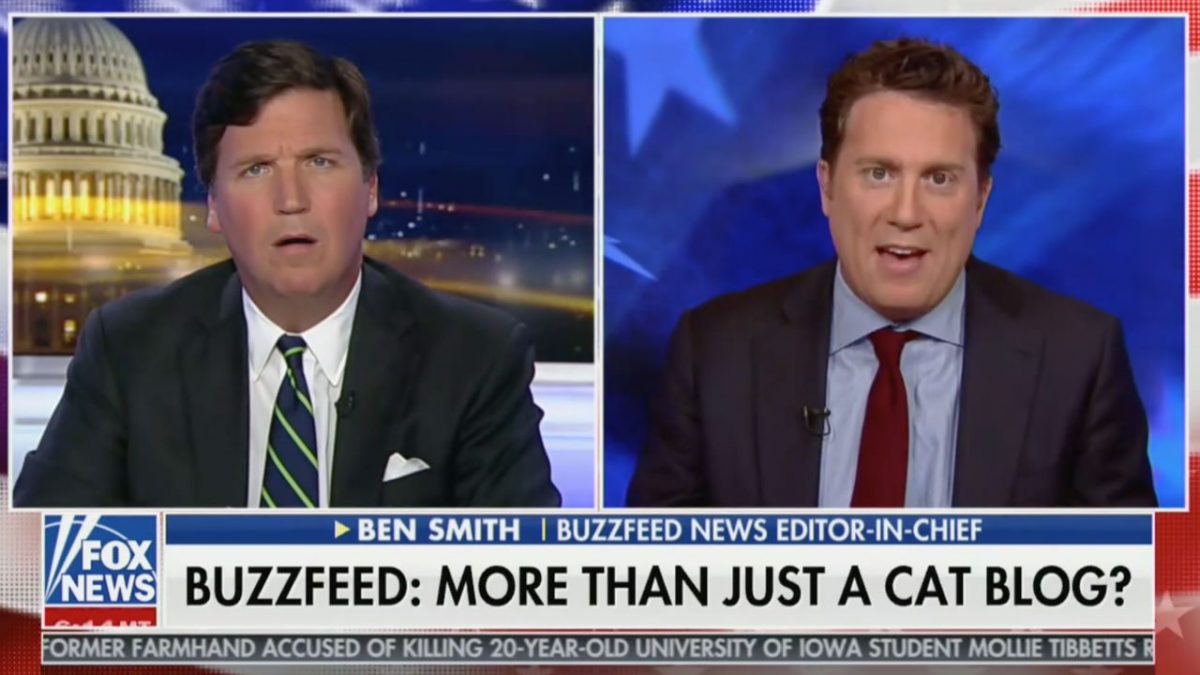 Carlson is, of course, the top-rated cable news host who enjoys great influence among viewers and conservative politicians due to a populist message that consistently targets DC insiders of all stripes. He blames the media for doing their part of cementing a status quo by elevating fat cats, of which his viewers are painted as victims.

The Times column is presented with the headline “Tucker Carlson Calls Journalists ‘Animals.’ He’s Also Their Best Source,” and it reports on multiple journalists who said they have been fed juicy info from Carlson over the years. To wit:

He’s the go-to guy for sometimes-unflattering stories about Donald J. Trump and for coverage of the internal politics of Fox News (not to mention stories about Mr. Carlson himself). I won’t talk here about any off-the-record conversations I may have had with him. But 16 other journalists (none from The Times; it would put my colleagues in a weird position if I asked them) told me on background that he has been, as three of them put it, “a great source.”

Smith’s sober and dispassionate report asks the fundamental question of how Carlson can be such a voluminous critic of the media when he is among the more prodigious sources of media gossip. Isn’t that sort of hypocritical?

The social media platform known as “Twitter” is a place where one can easily find reactions to news items, especially those that are so focused on each other’s navels. And the sorts of media critics that are commenting on media columns about media critics talking to media is a remarkably thin sample size, but it is the chattering class. And if you, dear Mediaite reader, are curious how this story is playing in the “chattering class,” well then this blog post is for you!

As you can see below in the thoughtful curation of blue-checked Twitter reactions to Smith’s story published roughly 12 hours ago, this story has made a significant splash in the nattering nabob swimming pool. And Smith’s column comes at a time when there are serious questions about Fox News and their vetting (or not vetting) of Carlson’s multiple and baseless reports that the insurrection of January 6th was an “inside job” led by FBI operatives.

Carlson is an opinion host, and like many other cable news hosts on many networks, does not feel the need to abide by accepted standards of journalism. But when he promotes a conspiracy as fact, is that still his opinion? Is Fox News—and the broader cable news ecosystem—so broken that we are now okay with dangerous and irresponsible lies going unchecked simply because we call them an “opinion”?

Well, that’s a column for another day (or maybe even later today!) Until then, enjoy some tweets! If you aren’t careful, you just might learn something.

this column is a great reminder that: a) most people have no idea how reporting works/journalists get info. b) i think political media that operates this way (maybe/probably all media?) is probably not up to the broader challenges of the moment https://t.co/BDMy1BarI5

TV is showbiz and hosts are mostly performers https://t.co/34zXf6Weeq

Upshot here is that Tucker Carlson trades cheap gossip to try to shield himself from accountability. What a gross dude.
https://t.co/JFzYTbPTdN

Now @benyt has cut in on @brianstelter cutting in on @ErikWemple. https://t.co/40QewJbcCs

what is this a gawker blog https://t.co/U2UFREFFXe

Extraordinarily unflattering to both Carlson – who is your basic DC insider gossip when not on playing a populist excoriating the media on TV – and the reporters that help to protect him https://t.co/5BzxSp1nUV

This is a weird assumption. This is not exactly a demographic that has ever been bothered by hypocrisy. https://t.co/0mNtRtfqvR pic.twitter.com/yAr89dzCg6

No way. Is Tucker having textual relations with the media? https://t.co/pFBIfW4imS