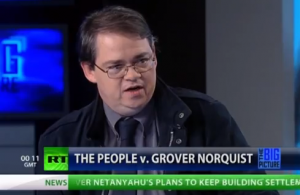 Mediaite’s Tommy Christopher paid a visit to Thom Hartmann on Monday to talk about the fiscal cliff negotiations and the direction the Republican Party is going in. Noting the advice many have offered for the party’s post-election recovery, Christopher contended that anything the GOP can approach in a more modern way “the Democrats are already doing better.”

Responding to Grover Norquist‘s assertion that “Tea Party 2 is going to dwarf Tea Party 1 if Obama pushes us off the cliff,” Christopher said a second Tea Party wouldn’t have the same impact because “it’s a different world now.” They used to be able to “get angry and stomp their feet” and people could relate, Christopher said — but as things improve, that won’t so much be the case.

On that note, the discussion turned to fiscal cliff negotiations. Hartmann asked how long Republicans can keep getting away with the game they’re playing. While Christopher wasn’t keen on giving Republicans advice, he said, “They are showing no signs of progressing. What they’re trying to do is just put some racing stripes on the same old crap.”

As for the “modernize versus moderate” approach that some have offered as a way for the GOP to recover, Christopher wasn’t entirely convinced. “Anything that the GOP can do in a more modern fashion,” he said, “the Democrats are already doing better.”

“Once you get rid of the guns and gays and all that business, they don’t have anything to offer than the Democrats don’t already offer,” Christopher argued.

Watch below, via RT: