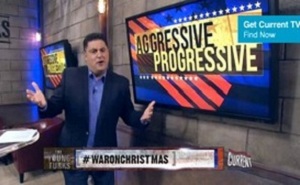 According to Cenk Uygur, The War On Christmas™ may have claimed its first official victim: the immortal soul of Fox News host and Christmas Brigadier General Bill O’Reilly. On Tuesday night’s edition of The Young Turks, the Aggressive Progressive™ host set his sights on O’Reilly’s recent defense of Christmas trees, pointing out the well-known pagan origins of said trees, while suggesting that, if 2nd century theologian Tertullian is any barometer, O’Reilly “might burn in Hell. Oops!”

Don’t worry, Bill, I’ve got your soul’s back.

Cenk began by schooling O’Reilly on the protections our constitutional government affords minority rights and opinions, vis á vis O’Reilly’s flawed argument that Gov. Lincoln Chafee (I-RI) should refer to his “Holiday Tree” as a Christmas Tree because “90% of Americans celebrate Christmas, and they want to call it a Christmas Tree.”

That’s not right, of course. Chafee should call it a Christmas Tree because that’s what it is. Separate and apart from whether you think they belong in a public space, you wouldn’t go around calling Menorahs and Kinaras “Holiday candelabras,” because that’s not what they are. Plus, our lord and saviour, Barack Obama, has decreed it so.

After going a little deeper into O’Reilly’s Greatest Hits catalog with a clip of Billo assuring an atheist that he’s not a pinhead, just a fascist, Cenk literally got medieval on O’reilly. “The early Christians were dead-set against Christmas trees, because they weren’t Christmas trees, they were Pagan trees,” Cenk said, adding that “One of the earliest Christian writer, Tertullian, wrote this. ‘Let them over whom the fires of hell are imminent, affix to their posts, laurels,’ that’s the trees that we’re talking about, ‘doomed presently to burn: to them the testimonies of darkness and the omens of their penalties are suitable.’ You understand that?”

Not really, but it doesn’t sound good.

Perhaps, but if Bill O’Reilly has it figured right, Cenk Uygur and Tertullian are at an 11, and they need to be at a five. See, Cenk and this Ter-TOOL-ian guy apparently missed the memo that Christianity is not a religion. It’s a memo that Bill O’Reilly wrote, but who are you going to believe? According to O’Reilly, Christianity is not a religion, it’s only a philosophy, so how can his eternal soul burn in Hell? Unless Hell is an eternal flaming philosophy class (which sounds plausible), in which case O’Reilly is screwed.