Michael Moore Asks President Obama: What If It Were Your Daughters Killed Last Week In Aurora? 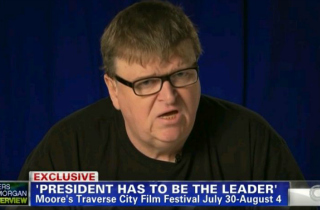 Controversial filmmaker Michael Moore will appear Tuesday night on CNN’s Piers Morgan Tonight to discuss gun control and last week’s Aurora, Colo. shooting that left 12 dead and dozens of other people injured. In a preview clip of the interview, Moore attacked President Barack Obama for his refusal to push for stricter gun control immediately after the massacre.

Moore noted that during the post-shooting address in Ft. Myers, Florida, President Obama mentioned his daughters Sasha and Malia as a way to show empathy with the victims’ loved ones, asking: “What if it were them?” And then implied that if the Obama daughters actually were killed in the shooting spree, the president would be more aggressive for gun control.

“Well… what if it were them?” Moore asked. “What if were them last Thursday night? Would you stand at the microphone the next day and say, ‘I feel your pain, and’ — this is what he said — ‘the existing gun laws are enough.’ Is that really what you’d say, Mr. President? I don’t think so.”

“We have to see these young people who were killed as our children,” Moore continued before going into a rant about how the United Kingdom and Canada have universal healthcare because their mentality is that “we have to take care of each other.” If legislators actually viewed the victims as their own children, Moore said, then “we would have some change in this country and politicians would respond quickly.”

“I am not going to come on another damn TV show after the next one of these shootings,” Moore told Morgan, as his voice began to rise. “I haven’t done it for ten years… but I’m sick of this.

“I refuse to live in a country like this,” he concluded, “[but] I’m not leaving.”