Michele Bachmann To Hannity: ‘I Am Happy To Accept [Chris Wallace’s] Apology’ 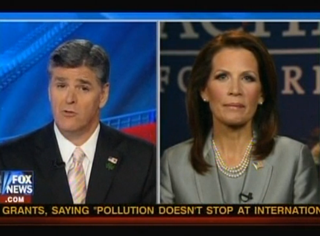 It’s official: Fox News Sunday host Chris Wallace and Rep. Michele Bachmann have buried the hatchet. On tonight’s Hannity, the Congresswoman and candidate for the Republican nomination in 2012 told host Sean Hannity that she had received a call from Wallace apologizing for asking her if she was a “flake” on his program on Sunday, “and I am happy to accept his apology.”

The question caused quite a stir over the weekend, as Rep. Bachmann took great offense to not being taken seriously as a candidate, and Rep. Bachmann later appeared hesitant to accept the public apology Wallace gave her in a video. On Hannity tonight, she explained why she gave the initial apology a frigid response. “I had not heard from him until suppertime today when he called,” she told Hannity, noting that as soon as she heard from him, she accepted the apology. “He did apologize, and I am happy to accept his apology, and we are moving on.”

Hannity stood up for Wallace to a certain extent, admitting that his question was a gaffe, but gaffes are commonly made in the industry. “I know Chris, he doesn’t have a mean bone in his body,” he noted, and argued that, perhaps, “we are trying to play this gotcha game a little too much.” Rep. Bachmann agreed, adding that it was partly due to “the immediacy of the information when it comes out.”

She also gave another explanation for why the comment seem to touch her so deeply– “the whole point of that interchange is that I am a serious person and a serious candidate for the presidency of the United States,” repeating some of her experience and concluding that she has “a titanium spine” and is “not part of the Old Boys’ Club.”