Mike Huckabee On Sarah Palin’s 2012 Chances: ‘A Seasoning Agent, But Not The Main Course’ 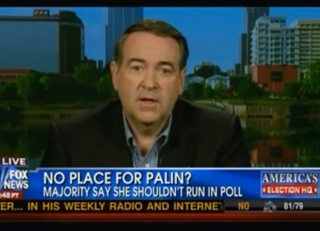 With her speaking engagement this weekend Sarah Palin has once again managed to bring the 2012 presidential spotlight on herself without jumping into the race, though polls are now showing her chances are rather compromised. Even if she does not run or win, however, at least Mike Huckabee thinks there’s a significant place for her at the table. On Fox & Friends this morning, the 2008 GOP candidate argued that, given her poll numbers, it may be Palin’s fate to “season the food,” but not be the “main ingredient.”

“You have to be very stubborn [to run],” Huckabee noted when presented with a Fox News poll showing upwards of 70% of Republicans hoping Palin doesn’t run for President. That said, Huckabee allotted her a “a very significant role that she plays as an advocate, someone who energizes the base of the party.” In switching gears, “the moment that she becomes a candidate, she becomes a target within her own party.”

In the chance that she does decide to run, however, Huckabee handicapped the results for the other candidates: she will “probably help” Mitt Romney, as Rick Perry and Rep. Michele Bachmann are currently vying for the same space Palin is after, so the three will be splitting the vote. With that in mind, however, Huckabee did not give her particularly high chances to win the nomination, later adding by way of compliment that “it’s not a bad thing to be able to season the food if you’re not the main ingredient,” suggesting Palin didn’t really have what it takes to be the “main course.”