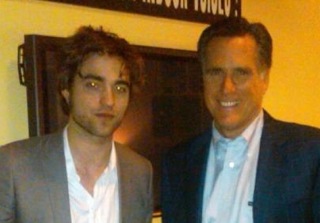 Mitt Romney is back in action, and this time around he is committed to campaigning as a casual, approachable president-in-waiting: the sort of guy you’d like to have a beer with, except he doesn’t drink. Romney visited Today this morning to chat about his campaign but, more importantly, shed light on what he does with his spare time– which apparently includes listening to ’60s rock and, even more shockingly, reading Twilight.

Romney sat down with Today‘s Jamie Gangel in his home and gave several textbook answers to campaign questions: President Obama’s handling of the economy gets an F; his religion will not have a deep impact on his governing style. Of the latter, when asked whether he saw his faith as a problem, Romney reminded Gangel that “we’re not electing a pastor in chief, we’re electing a commander in chief.”

Romney also displayed a fairly robust sense of humor about his faith, noting that his reaction to the Matt Stone/Trey Parker Broadway production The Book of Mormon was to laugh. “South Park is funny,” he admitted, adding, “you know your faith has made it big time when it’s being made fun of on Broadway.” But even more shocking was his admission that he read and enjoyed Twilight, the vampire series that became that movie your 12-year-old cousin wouldn’t stop talking about. “I like the Twilight series; I thought that was fun,” he said, adding that he discovered it through his granddaughter. He did add a caveat though: “I don’t like vampires personally– I don’t know any.”

Whatever you say, Romney. The Atlantic tracked down the incriminating photo of Romney with Twilight star Rob Pattinson from the Boston Globe from a taping of The View. He may not like vampires personally, but he at least seems to prefer them to werewolves.

Romney’s conversation on Today this morning via NBC below: