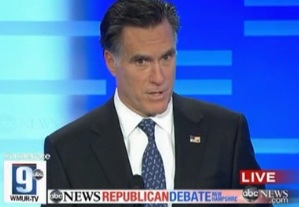 At tonight’s ABC News/WMUR Republican presidential debate at Saint Anselm College in New Hampshire, former Massachusetts Governor Mitt Romney stumbled badly on a Constitutional question from moderator George Stephanopoulos, first trying to punt it to “our Constitutionalist” Ron Paul, then demonstrating painful ignorance about the issues of privacy and banning contraception. To his credit, George pursued him like Tommy Lee Jones in The Fugitive. The Republican crowd was none too pleased with the line of questioning, booing Stephanopoulos several times.

“Senator Santorum has been clear in his belief the Supreme Court was wrong when it decided a right to privacy was embedded in the Constitution. He believes states have the right to ban contraception. I should add he’s not recommending that states do that,” Stephanopoulos began, speaking to Mitt Romney.

Santorum cut in, “Be clear…”

“Absolutely…I want to get to that core question,” Stephanopoulos continued. “Do you believe states have the right to ban contraception, or is that trumped by a constitutional right to privacy?”

Stephanopoulos tried to help him out, but Romney plowed on, saying, “I would oppose any effort to ban contraception. So you’re asking — given the fact there’s no state that wants to do so, you’re asking could it constitutionally be done? We can ask our Constitutionalist here.”

Presumably, if elected, Romney will hire a “Constitutionalist” of his own.

“Do you believe states have that right or not?” Stephanopoulos pressed.

Romney dug himself in a little deeper. “George, I don’t know whether a state has a right to ban contraception. No state wants to. The idea of you putting forward things that states might want to do that no state wants to do and asking me if I want to do it or not is kind of a silly thing.”

The audience applauded Romney’s assessment of the obviously far-fetched premise.

Stephanopoulos tried to help him out again. “Hold on a second. governor, you went to Harvard law school. you know very well…”

Then Romney displayed the fruits of that education. “Has the Supreme Court decided states do not have the right to provide contraception?” he asked.

Oof. The first thing you learn in law school is never to ask a question you don’t already know the answer to.

Not only that, but despite Romney’s insistence to the contrary, several states have introduced “personhood” ballot measures that could ban most forms of birth control. The question is as closely-fetched as it gets.

“To allow states to ban contraception?” Romney said. “No. Why would we try to put it in the Constitution? With regards to gay marriage, I told you that’s when I would amend the constitution. Contraception, it’s working just fine, just leave it alone.”

Stephanopoulos tried one more time. “I understand — you’ve given two answers to the question. Do you believe that the Supreme Court should overturn it (Griswold) or not?”

The crowd disapproved of the followup, and Romney kicked it into the stands again. “Do I believe the Supreme Court should overturn Roe v. Wade? Yes, I do.”

This kind of ignorance might play well with an audience that feeds on media victimhood, but in a general election, Romney is going to need to be better prepared for questions like these.