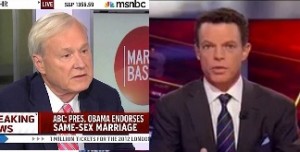 Conservative website Newsbusters is outraged, OUTRAGED! that MSNBC’s Chris Matthews compared opponents of marriage equality with proponents of slavery and segregation. When Fox News’ Shep Smith made almost the same comparison, though, the site didn’t deem it headline-worthy, although they did point out that Smith was showing his “true colors,” whatever that means.

What either Newsbusters article failed to even attempt was to explain how the comparison was wrong.

At the tail end of a segment on the political implications of President Obama’s newly-expressed support for same-sex marriage with Bret Baier, Fox News’ Shep Smith dropped an intense aside, noting that the President’s declaration changes nothing legally. “It’s a state issue for now, at least, which may sound familiar to a couple of generals ago, but that’s where we are,” Smith said, a clear reference to “states’ rights” arguments that were used in favor of Jim Crow, and before that, to prop up slavery.

Shep did specify “a couple generations ago,” which means his intent was probably a comparison to the Civil Rights Era, but the same arguments applied to slavery. As Newsbusters notes, in a later segment Smith said “”Shades of segregation and states rights and the whole thing [are] playing itself out all over again isn’t it?”

The closest Newsbusters‘ Jeffrey Meyer came to refuting the comparison was to call it a “liberal talking point,” and to call Smith’s overall commentary “condescending.”

Meanwhile, Newsbusters‘ Scott Whitlock reports on a Hardball segment in which Chris Matthews makes the comparison much more broadly and explicitly, and while he shows his displeasure by bolding the money quote, Whitlock never gets around to explaining why the comparison is wrong:

MATTHEWS: That’s the good news for everybody in the country in terms of freedom and the long march towards liberalism in the country, which has always moved forward for rights for all kinds of people. It has always been forward-leaning, as we say on this network actually, and it has always moved in that direction. But there has always been another army out there that feeds on those who resent it. That army has been out there during Jim Crow. It was out there during abolition, during suffrage. There’s always an army that feeds on change and feeds against it. The wolves, and they’re being released right now and they’re probably giggling with delight at how they’re going to use this.

They never explain how any of these things are untrue, but if they are true, then how can they be examples of bias? Details!

Since Newsbusters failed to, I will explain what’s wrong with these comparisons. Former RNC Chairman and current MSNBC contributor Michael Steele feels like the exponentially different degrees of suffering inherent in these comparisons alienate many black people, which is a fair point, depending on how it’s made (“Gay is the New Black,” for example, legitimately rankles). However, the narrow and obvious parallels are valid: the very same arguments that support marriage inequality once supported “miscegenation” laws.

While much has been made of black opposition to same sex marriage (including by Chris Matthews), the fact is that there’s only about a four-point swing between white and nonwhite voters on the issue.

Where I really see this comparison falling apart, though, is in the area of cost. Ending slavery actually cost people something: it cost slave owners a large amount of personal property, it cost them the money they then had to pay people for their work, and it cost hundreds of thousands of lives. Desegregation also carried significant costs, to say nothing of the hits taken by the water fountain and “Colored Only” sign industries.

Marriage equality, though, doesn’t cost anybody anything, unless you count having someone to feel superior to, but trust me, you can still do that. In fact, gay marriage is a net economic benefit, which could only possibly be offset by a slight downturn in rainbow flag sales. People who opposed ending slavery and segregation were being hateful, selfish pricks. Opponents of gay marriage are just being pricks.

Here’s a clip of Matthews’ and Smith’s remarks, from MSNBC and Fox News: