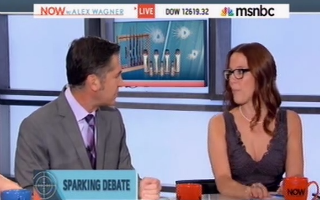 The panel became tense when Wagner opened with a discussion about proposed New York State legislation that would encode shell casings on bullets to more easily track those guns used in crimes. Major gun lobbies have opposed the legislation and at least one gun maker is threatening to pull their operation from New York if the bill passes.

Cupp, who describes herself as a gun owner, called the legislation “silly.”

She said that most crimes are committed by those who have unregistered weapons while registered gun owners use their guns legally. Furthermore, the legislation would increase the manufacturing costs on gun makers which would be passed on to the legal gun consumer.

The debate quickly became heated when Gross challenged Cupp’s invoking costs. “At what cost is the savior of human lives,” asked Gross.

Crosstalk ensued until Gross asserted that this law has nothing to do with “gun control” and does not prevent gun purchasing. “This does not prevent anybody buying or selling a gun,” said Gross. “How can you call it gun control?”

Cupp became frustrated with what she described as the “hysteria” that surrounds guns and gun owners when there is high profile gun violence in the news.

“This is an industry that at all costs wants to protect its profits and it does so at the expense of human lives,” said Gross of the gun lobby.

“No, it wants to protect the Second Amendment which is under assault,” Cupp responded.

Wagner lamented that gun owners are too rigid in their resistance to laws that are designed to prevent gun violence. Cupp agreed, and said that both sides of the issue contribute to the hysteria surrounding the debate about gun ownership.

“I don’t accept that,” said Gross, interrupting Cupp as she attempted to make an equivalency between supporters and opponents of gun control legislation.

“Well, that’s okay,” said Cupp. She said that gun violence always prompts a conversation about the banning of fire arms.

Gross strongly objected to that suggestion. “Show me one word that’s ever come out of my mouth …”