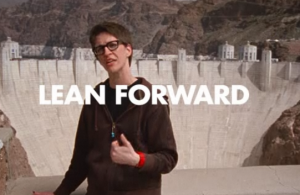 The Spike Lee-directed promotional campaign for MSNBC, Lean Forward, debuts a new series of spots today, featuring Chris Matthews, Lawrence O’Donnell, Rachel Maddow and Ed Schultz–each shot by Lee in iconic American locations, from the Hoover Dam to Washington, D.C. “These ads are unlike anything else,” said Phil Griffin, president of MSNBC. “They are mini-documentaries that express the passion of our primetime hosts. You’re able to truly learn what drives them and why their audience tunes in to watch their shows.”

The new series of spots begins airing on MSNBC today, and will appear in movie theaters over the summer. The new spots replace the first series, which included then-Countdown host Keith Olbermann writing a commentary and Rachel Maddow covering her office floor with index cards. The new spots deal with hot issues:

MSNBC’s Lawrence O’Donnell – Spike Lee shot O’Donnell in New York City, where he opined on the pressing issues of immigration and health care

MSNBC’s Rachel Maddow – Spike Lee shot Maddow at the Hoover Dam, where she discussed the importance of having a renewed national focus on infrastructure

MSNBC’s Ed Schultz – Spike Lee shot Schultz in his hometown of Norfolk, VA, where he spoke about the problems facing the middle class and the imperative need to create jobs