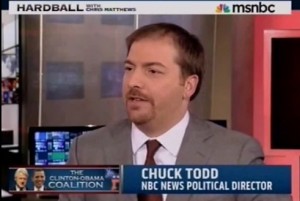 Last Friday’s super-awkward joint presidential press conference that saw President Obama effectively abdicating his podium to former President Bill Clinton, created a bit of a media maelstrom. And while some have gone back to discussing the effects of extending the Bush Tax Cuts, many are still talking about the odd effect that Clinton has over the media, particularly those firmly ensconced inside the beltway. Take for example the following conversation between NBC News’ Chuck Todd and Hardball host Chris Matthews in which Todd simply calls it like he sees it.

It does seem to be true that many in the media “get the vapors” over the presence of the former president, perhaps nostalgic for the halcyon days of the late ’90s. But it is rare that a journalist makes so candid a comment about his media peers, calling them “kool-aid drinkers” over Bill Clinton’s mojo.

Transcript of the exchange (via NewsBusters)

CHUCK TODD: It’s sort of weird: everybody made a huge deal out of Bill Clinton supporting the president’s [tax] deal. I think it would have been bigger news had he not.

CHRIS MATTHEWS: Yeah, but he could not have shown up.

TODD: He didn’t have anybody from the left of the [party endorsing the deal]. It wasn’t as if President Clinton–I don’t know, this does feel like one of those moments: I think we’re enamored with it in the media. I think there’s always been people, there’s a lot of Clinton Kool-Aid drinkers in this respect.

MATTHEWS: You are getting so hard and so sophisticated!

TODD: This obsession with the shiny metal object that has the Clinton name on it.