Obama Ribs Fox’s Ed Henry: ‘Didn’t Know You Were The Spokesperson For Romney’ 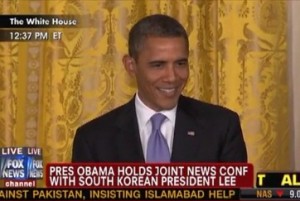 Since becoming Fox News’ Senior White House Correspondent in July, beat veteran Ed Henry has endured several barbs from Press Secretary Jay Carney, but today, it was President Obama needling Henry. At a joint press conference with South Korean President Lee Myung-bak, Henry asked the President to respond to a quote from Republican presidential candidate Mitt Romney over recent actions by Iran, to which President Obama replied, “I didn’t know you were the spokesperson for Mitt Romney.”

There was little doubt that Henry knows his audience when he asked the President, “What specific steps will you take to hold Iran accountable, especially when Mitt Romney charged last week, quote, “If you do not want America to be the strongest place on Earth, I am not your president. You have that president today.'”

The President joked, “Well, I didn’t know you were the spokesperson for Mitt Romney.”

While ABC News’ Jake Tapper didn’t get a similar reaction when he asked Jay Carney about the same quote last week, it’s worth noting that Romney made those remarks before news of the Iranian plot broke. Henry’s inclusion of it in a question about the plot to assassinate a Saudi ambassador was a bit of a stretch, but a nice try at getting the President to make some campaign news.

In any case, it’s highly doubtful that Henry would have gotten such a response when he was with CNN.