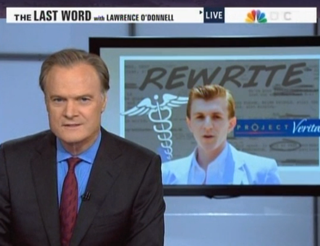 Lawrence O’Donnell agrees on something with right-wing filmmaker James O’Keefe: the government is wasting tax dollars. That is, of course, where it ends, as O’Donnell explained during his “Rewrite” segment tonight how O’Keefe’s latest video, depicting a fake IRA member applying for Medicaid, proves only that the government employee is “accustomed to dealing with crazy people,” and that wasting tax dollars on an investigation of the office was an outrage.

O’Donnell began his segment highlighting his particular dislike of O’Keefe, “Andrew Breitbart‘s protege,” and his “flamboyant costuming in his videography”– mocking his kilt and “what he alone thinks is an Irish accent.” Scoffing through the story of “Sean Murphy,” a fake IRA member played by a Project Veritas actor that visits a government office to apply for Medicare despite being part of a terror group, O’Donnell played an edited clip that appeared to show the government worker helping him apply. Then he played a more extensive clip, where, he explained, the employee was “taking very long pauses… in response to the insanity that comes her way.”

“Dealing with crazy people politely is part of the job,” O’Donnell noted, and while she fills out the form, O’Donnell notes that she gives “Murphy” “no guarantee that he and his fictitious associates will receive any Medicaid assistance.” Instead, she goes through the motions, “simply doing her job.” But what O’Donnell objected to the most, even more than O’Keefe’s pranks, was the fact that the state of South Carolina was actually going to investigate the office in the video. “State officials are actually, for some reason, investigating this incident,” agreeing, in some ways, with O’Keefe that tax dollars were being wasted in this scenario. “Their tax dollars,” he concluded of South Carolina, “are being wasted investigating a goofy right-wing stunt.”