O’Donnell: Rep. Cantor Is ‘An Incompetent Amateur Who Deserves No Place In Congressional Leadership’ 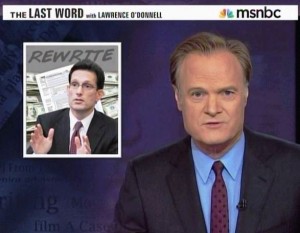 Rep. Eric Cantor is having a pretty rough week. Sure, he’s not alone– those debt talks at the White House seem to be turning everyone’s hair gray, but after last night’s reported lecture from the President, the House Majority Leader has kept quiet. All the better, says Lawrence O’Donnell, who aired an old debate with Rep. Cantor tonight to prove that Rep. Cantor was “an incompetent amateur who deserves no place in Congressional leadership.”

O’Donnell has never met Rep. Cantor, though the two did debate on Morning Joe in 2009. O’Donnell introduced that clip highlighting the differences between House Speaker John Boehner and Rep. Cantor– “Boehner has never met a tax increase he didn’t hate.” Rep. Cantor, on the other hand, had much to say about a certain proposed tax increase that formed the crux of the debate on that fateful Morning Joe episode. Asked several times how he would vote on a proposed tax increase by Rep. Charlie Rangel, Rep. Cantor refused to answer, despite the vote being hours away. O’Donnell notes that, ultimately, Rep. Cantor voted for the bill– along with Rep. Rangel and Rep. Dennis Kucinich.

This vote proved to O’Donnell, as well as his trouble figuring out how to vote on the bill in the first place, that Rep. Cantor was “the worst amateur who had ever ascended to a leadership position in Congress.” The vote, O’Donnell notes, should have been easy: “it was not hard for Rep. Boehner to decided how to vote.” His incompetence, O’Donnell concludes, is the reason for the private squabble with the President last night– “the President obviously realized this from the start,” he said of Rep. Cantor’s incompetence, concluding with support for having Rep. Cantor removed from the highly important debt talks.