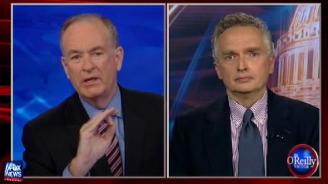 But it was later in the show, when he got into why we need to “win hearts and minds,” that he waded into some murky territory.

It was an act of terror, but let me play devil’s advocate here. Barack Obama wants to win hearts and minds in the Middle East, in the Muslim world, which is a good thing, you know that, as a soldier, we can’t kill all the Muslims. So we want to win as many hearts and minds of good moderate Muslims as we can. So he goes out of his way, you’re absolutely right, to avoid the Muslim terrorist label which clearly applies for Hasan. But he doesn’t do it, because he wants to tamp down the anger in the Muslim world rather than ratchet it up, so is that not a worthy strategy?

Peters is immediately dismissive. “No it’s not because it doesn’t work,” he said. But what exactly did O’Reilly say? Yes, he’s playing devil’s advocate here, but the implication is that because we can’t kill all the Muslims, we have to try to win their hearts and minds. One possibility is that O’Reilly simply misspoke – maybe he meant “terrorists” instead of “Muslims.” But when you hear it in context, it just doesn’t sound like it’s a mistake.

Later, O’Reilly turned his attention to the Army, which he feels is partially responsible as well. Peters turned it back to political correctness. “Because he was a minority of a minority, a Muslim doctor in the Army, a psychiatrist, Hasan kept slipping through because nobody wanted to take him on,” he said.