Olbermann Is More Peeved At Dr. Laura’s Obama Comments Than Her N-Words 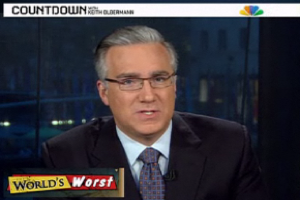 Dr. Laura‘s now-infamous racist rant has launched a massive wave of criticism her way for her use of the n-word and advice to her caller that she should not “marry out of her race.” Surprisingly, Keith Olbermann didn’t seem to take too much offense to those remarks, because, according to his “Worst Persons” segment on Countdown last night, there was something much more insidious in her commentary, and much more indicative of racism.

Laura Schlessinger, of course, took home to gold in last night’s “Worst Persons”– not even Bill O’Reilly could take this prize away from her– for her “genuine blind ignorant racism.” Not that Olbermann didn’t expect bad things to happen on her program– “her show’s crap, we know that”– but none of said racism, had much to do with her use of words, the thing she apologized for. That to Olbermann was tame compared to her sentiments about President Obama which, in sum, were that she didn’t expect people to complain of racism after his election. Olbermann broke it down:

The video from MSNBC last night below: