O’Reilly Blasts Obama’s Press Conference: Journalists ‘Allowing The President To Roam At Will’ 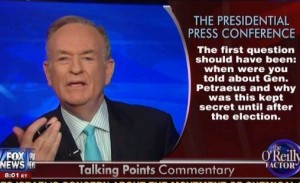 Bill O’Reilly opened his show tonight by criticizing President Obama for holding what he considered a sham of a press conference. O’Reilly was frustrated that Obama was not properly grilled on his knowledge of the Petraeus affair, and when he did answer questions the president provided the press in attendance with “long-winded answers” that ultimately proved the whole thing to be a big waste of time, with O’Reilly bemoaning that the “press in Ameerica is in terrible shape.”

O’Reilly said the first question should have been about when he learned of Petraeus’ affair and why the information was kept secret until after the election. But instead, Obama was asked an “opinion question” and thus had enough wiggle room in order to avoid directly answering the question. O’Reilly ran the entirety of Obama’s answer to show viewers how the president handled the question.

He criticized Obama for not giving any real answer, but instead just refusing comment while investigations are ongoing. O’Reilly did credit Fox News White House correspondent Ed Henry for getting tough with Obama on Libya. Henry tried to get Obama to address the families who lost loved ones in Libya directly, but the president deflected.

The only detail Obama clarified, according to O’Reilly, was that he gave orders to make sure the Americans stationed in Libya were given proper security. O’Reilly criticized the overall press conference and the journalists in attendance for “allowing the president to roam at will.”