O’Reilly Cautions DOJ Seizure Of AP Docs ‘Not A Scandal,’ Takes Shots At MSNBC: ‘No One Watches That’
video

O’Reilly Cautions DOJ Seizure Of AP Docs ‘Not A Scandal,’ Takes Shots At MSNBC: ‘No One Watches That’ 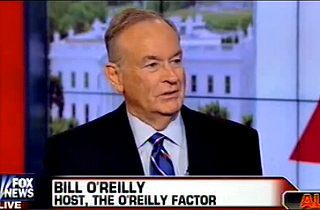 Appearing on Fox News’ America’s Newsroom this morning, Bill O’Reilly began his Keep It Pithy book tour by tackling each of the three big scandals currently rocking D.C. this week: revelations that the IRS targeted tea party groups for additional scrutiny during the 2012 election cycle; the battle over the administration’s handling of Benghazi; and the news that the Department of Justice secretly seized private phone records from the Associated Press.

While O’Reilly maintained strong positions on the first two, he expressed skepticism that the latter was at all a “scandal,” and could very well be a justified action on the part of Justice.

“It’s not a scandal yet,” O’Reilly said of the AP news before explaining that the Justice Department may have been justified under a hypothetical situation in which a news agency gets wind of a covert military operation, rendering it necessary, in O’Reilly’s mind, for the federal government to try and find who leaked classified information.

“They’ve done this since George Washington, this happens all the time,” he said. “Congress and the Supreme Court have allowed them to do it, so let’s just wait and see what this is.”

On Benghazi, O’Reilly suggested that the situation comes “close to Watergate” in terms of reportage. “You have to just squeeze the Obama administration for anything. It’s so absurd, it’s so ridiculous,” he lamented.

The president should own up to not providing ample security at the Libyan consulate, O’Reilly continued, “Everyone knows that except the people at MSNBC. But everyone else in the world knows that.”

Host Martha MacCallum pushed back that their rival channel seems to be coming around on the issue of whether the Obama administration acted poorly in the wake of the Benghazi attacks.

O’Reilly took this as an opportunity to bash MSNBC: “They’ll never realize it. But it doesn’t matter because no one watches them.”

The Factor host went on to stress that he is just asking “simple questions,” because he’s a “simple man,” and yet he doesn’t feel satisfied with how the administration has explained the Benghazi and IRS controversies.