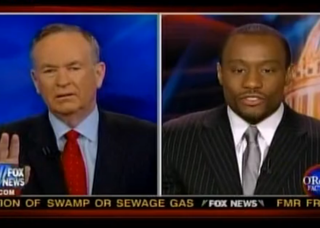 The Egyptian revolts are now several days old and, with the time distance growing enough to allow evaluation, the media is starting to look at how President Obama has reacted to the situation. Tonight Bill O’Reilly asked his panel– Mary Katharine Ham and Marc Lamont Hill— to play professor and hand out letter grades, and was shocked to find that the President got a better grade out of him than anyone else.

O’Reilly first turned to Ham for her grade, to which she gave him a skeptical look before being “a little more friendly” and giving the President a “C” because “it’s fair to be clumsy” in the current situation. This wasn’t too satisfying an answer to O’Reilly, who demanded to know what Ham believed the President should have done differently to get a higher grade. Before she could fully answer, however, her liberal counterpart was enthusiastically handing the Obama administration a “D-as-in-David D-” for their diplomatic performance.

He began to explain the rationale for his grade by rattling off the comments from Vice President Joe Biden that Hosni Mubarak was “not a dictator” to the refusal of the administration to yet take a side. Hill did answer what he would have wanted to see instead– for the President to “denounce despotism” and “promote democracy.”

O’Reilly adamantly disagreed that the smartest thing would be to renounce Mubarak, arguing that “this guy has kept Israel and Egypt out of war for 30 years. That means something.” Acknowledging that the President is “in a tough spot,” he gave him the highest grade on the panel– a B, prompting Hill to shout, “what is this, the Twilight Zone?”

The segment from tonight’s O’Reilly Factor via Fox News below: