Pat Robertson Warns: America ‘Asking For Wrath Of Almighty God’ If Any Concessions Made To Palestine
video

Pat Robertson Warns: America ‘Asking For Wrath Of Almighty God’ If Any Concessions Made To Palestine 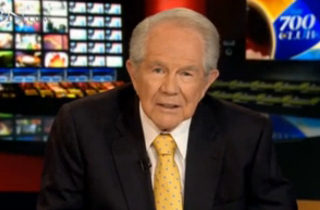 On his 700 Club program this morning, televangelist Pat Robertson issued a dire warning for America should Secretary of State John Kerry be successful in his push for a Mideast peace plan that includes Israel pulling out from territories gained during a 1967 war.

As part of Kerry’s revival of an decade-old proposal, Israel would give back much of the land she took over as part of the Six-Day War, including East Jerusalem, the location of many religious sites for Judaism, Christianity, and Islam.

“I think this is headed for disaster for the United States,” Robertson said of the proposal. “God says, ‘They divided my land.’ There is something about dividing God’s land, he said, ‘This is my land, I gave it to Abraham and his descendants and I don’t want it taken away from them and Jerusalem is the eternal capital of Israel.'”

He continued: “For the United States to get into a deal where they’re trying to split Jerusalem and take it away from the Israelis and split up their capital — huge mistake. You are asking for the wrath of Almighty God to fall on this nation and when it falls it won’t be fun, it won’t be fun.

Robertson went on to encourage his viewers to do everything they can to “restrain” American leaders from pursuing “this course of folly” which he believes will “result in terrible suffering for people in the United States.”