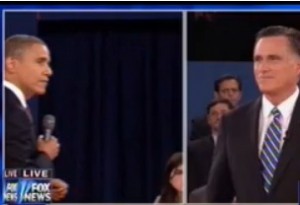 In a night of strong moments for President Obama at Tuesday night’s debate, one of the strongest was his snappy summation of Republican nominee Mitt Romney‘s tax plan, which has been famously at odds with The Math for quite some time now. While Gov. Romney trotted out his ill-defined bucket plan, President Obama countered by, yes, going through some of the math, but more importantly, by delivering a rejoinder that was simple and emotionally truthful. Describing Gov. Romney’s plan, the President turned to Romney and said, as a businessman, “you wouldn’t have taken such a sketchy deal. And neither should you, the American people.”

“Now, Governor Romney was a very successful investor,” the President began, turning to Romney. “If somebody came to you, Governor, with a plan that said, here, I want to spend $7 or $8 trillion, and then we’re going to pay for it, but we can’t tell you until maybe after the election how we’re going to do it, you wouldn’t take such a sketchy deal and neither should you, the American people, because the math doesn’t add up.”

He went on to say that “this (either) blows up the deficit, because keep in mind, this is just to pay for the additional spending that he’s talking about, $7 trillion – $8 trillion before we even get to the deficit we already have. Or, alternatively, it’s got to be paid for, not only by closing deductions for wealthy individuals, that will pay for about 4 percent reduction in tax rates.”

“You’re going to be paying for it,” President Obama concluded. “You’re going to lose some deductions, and you can’t buy the sales pitch. Nobody who’s looked at it that’s serious, actually believes it adds up.”

Romney, for his part, was forced to abandon the discredited talking point about “studies” that support his plan. Moderator Candy Crowley asked him “Governor, before we get into a vast array of what study says what, if it shouldn’t add up, if somehow when you get in there there isn’t enough tax revenue coming in, if somehow the numbers don’t add up, would you be willing to look again at a 20%…”

Romney cut her off, impatient and almost literally back on his heels. “Well, of course they add up,” he insisted. “I – I – I was someone who ran businesses for 25 years and balanced the budget,” he continued, and changed the subject to anything but The Math. It was probably the point at which Gov. Romney was least in control in the debate, but he would eventually manage to pull himself together somewhat.

That image, though, of President Obama finishing off his answer with a calm glare, to a clenched Romney, was basically the story of the night.