Rand Paul: How Can Kerry ‘Ask a Man to be 1st to Die for a Mistake?’ 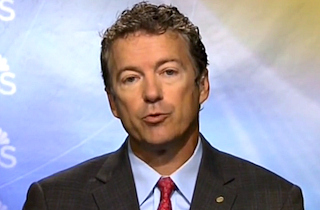 Kentucky Senator Rand Paul told Meet the Press host David Gregory that he was not convinced by Secretary of State John Kerry’s arguments to vote for military strikes against Syria, and that he believed U.S. intervention could make the crisis worse—if Congress approved of the actions at all.

Paul did approve of President Barack Obama’s taking the case for military intervention to Congress, but was suspicious of indications from the administration that Obama maintained the right to act without congressional authorization.

“One thing I’d say I’m proud of the president for is that he’s coming to Congress in a constitutional manner and asking for our authorization,” Paul said. “That’s what he ran on. His policy was that no president should unilaterally go to war without congressional authority. And I’m proud that he’s sticking by it.”

“But you ask John Kerry whether or not he’ll stick by the decision of Congress, and I believe he waffled on that and wobbled and wasn’t exactly concrete that they would,” Paul said. “But absolutely, if Congress votes this down, we should not be involved in the Syrian war. And I think it’s at least 50/50 whether the House will vote down involvement in the Syrian war.”