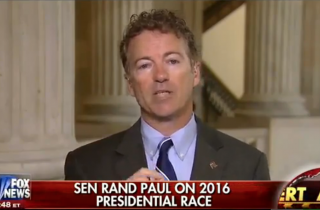 Rand Paul is not going to take insults from the Republican Party’s hawkish senators lying down. During a Tuesday morning appearance on Fox News, the GOP presidential candidate blasted Sens. Lindsey Graham and John McCain as “lapdogs” for President Barack Obama‘s policies.

On Monday morning, Sen. Graham told Morning Joe that Paul is “more wrong than right” on foreign policy, and that “even Obama” is stronger than the libertarian-leaning senator when it comes to dealing with threats abroad. The U.S. Senator from South Carolina accused Sen. Paul of wanting to “lead from behind” on global issues. Additionally, Sen. McCain — Graham’s best friend for life — charged that Paul “just doesn’t understand” foreign policy.

Paul fired back at both senators during an interview with Fox’s Bill Hemmer (emphasis added):

Apparently forgetting that “interventionist vs. isolationist” is a false dichotomy, Hemmer asked Paul to define himself as one of the two.

“I’m a reagan republican,” Paul responded. “I believe in strong national defense, I believe in peace through strength. I think that intervention is not always the answer and that some interventions lead to unintended consequences.” The senator outlined the various negative results of American action in Libya, Syria, and described how his critics often want to “bomb both sides” of an ongoing struggle abroad.

“Their foreign policy is so disjointed, confusing, and chaotic,” he continued of his intra-party foes, “that really people need to reexamine those who want to be involved with any war. I think we get involved when there’s an American interest. I think we have to militarily stop ISIS. But i’m sad that ISIS got a lot of weapons from interventionists in my party and the president who gave them weapons indirectly.”