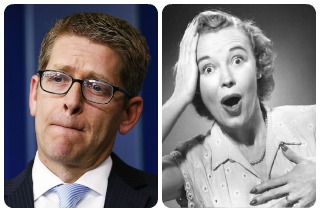 The impropriety displayed on Wednesday by a high school-age intern who dared to ask White House Press Secretary Jay Carney a question relating to the security provided to the family of George Zimmerman knows no bounds. That is apparently the opinion of a number of members of the political press. After an intern had the temerity to ask Carney a question, the political media flew into a tizzy over the presumptuousness of the intern and turned to mocking him and the venue which credentialed him to be in the Briefing Room in the first place.

Moments after the event which shall henceforth be known as “Intern-Gate,” POLITICO’s Jennifer Epstein quickly posted a three sentence write up chronicling the incident. A subsequent post from Epstein revealed that the 16-year-old intern, Gabe Finger, asked Carney about the security provided Zimmerman’s family in the wake of the controversial not guilty verdict handed down last Saturday. Carney said that President Barack Obama and the Martin family have called for a non-violent reaction to the verdict.

“So, they’re on their own?” Finger followed up.

“You can editorialize all you want, and I’m sure that you will, but that is a ridiculous statement,” Carney shot back.

The reaction to the question the political press to l’affaire de intern was swift and remorseless:

In fairness, a handful of members of the political press congratulated Finger on his success at sneaking a question in during the press briefing, but those exceptions merely prove the rule.

This contempt the reporters and commentators above displayed probably inspired a series of high fives and “attaboys” from some of their colleagues but, from outside The Bubble, the appearance of media elites bristling over gall of an intern for merely asking a question of a government official is not a good look.

Some reporters in Washington are asking why The Daily Caller sent our intern Gabe Finger to the White House press briefing this afternoon. Talk about missing the point. The real question is, why did it take a 16-year-old intern to raise an obvious and important question that the White House press corps should have asked days ago? We don’t care how old Gabe Finger is. It doesn’t matter to us what his credentials are. All we care about is how well he does his job. Today he did it a lot better than most White House reporters.