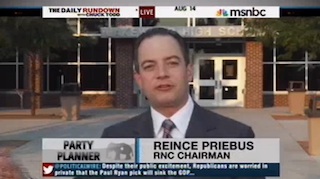 This morning on MSNBC, RNC Chair Reince Priebus showed up to talk about Paul Ryan and the coming Republican Convention. After Priebus spent some time explaining that the convention would be all about telling “The Mitt Romney Story” (gosh, I hope they tell it in 3D!!!), Chuck Todd asked him about comments he made over the weekend accusing President Obama of having “blood on his hands” with regards to Medicare. Priebus made no attempt to back down, repeating his accusations that Obama “stole” $700 billion dollars from the program.

RELATED: RNC Chair Reince Priebus: Obama ‘Has Blood On His Hands’ After Stealing From Medicare

Priebus’ comments from Sunday came after a long, fun week of both political parties accusing each other of murdering old people and such. The Dems accused Mitt Romney of giving kindly wives cancer and Paul Ryan of ripping Medicare out of their arthritic fingers while Preibus accused Obama of having your grandmother’s blood dripping from his fingers. Which are all rational accusations for adults to make.

Todd asked Preibus if his phrasing (“stole,” “blood,” “hands,” etc.) had been appropriate and Priebus was sure it was. He claimed that Obama had said the same things about John McCain in 2008 and, therefore, had no right to complain.

Yes, it’s death panels all over again. Every four years, we get to hear about how our leaders are nothing but a bunch of Patrick Bateman’s with an older preference in victims. Honestly, I hope it’s true. For one thing, if our politicians are all actually terrifying serial killers, that would mean that “The Mitt Romney Story” will be much less boring.

Ed. Note: The post originally said “million” instead of “billion” because, unlike the “regular folks” currently campaigning to run this country, this writer can’t possibly comprehend monetary numbers that high. Thank you to all the dressage fans for pointing out the mistake. :)