Rep. Paul Kanjorski Under Attack For Putting ‘Minorities’ And ‘Defective’ In Same Sentence 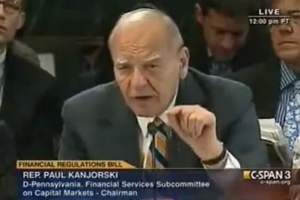 Today was not shaping out to be a great day for Republicans in the House. First, a video was released of Iowa Rep. Steve King making what sounds suspiciously like a birther joke. Then there was Rep. Louie Gohmert, who read out a column comparing the BP escrow account to, uh, Hitler, on the House floor. And then Democratic Rep. Paul Kanjorski noted that the people benefitting from the finance bill were not “minorities or defective people.”

The video quickly made it to the four corners of the conservative blogosphere– most notably, The Corner and RedState, where he got the headline “Paul Kanjorski is a Racist Fool.” Before jumping to conclusions, let’s look at the full quote:

“We’re giving relief to people that I deal with in my office every day now unfortunately. But because of the longevity of this recession, these are people — and they’re not minorities and they’re not defective and they’re not all the things you’d like to insinuate that these programs are about — these are average, good American people.”

Operative phrase: “not all the things you’d like to insinuate that these programs are about.“Kanjorski clarified in a statement to the press afterwards “that many people insinuate that those who benefit from government programs are those not looking for jobs, but that those suggestions are wildly inaccurate.” He wasn’t making the point that minorities are “defective people,” although he left his defenses open wide enough to make it possible to put in a couple of clever ellipses and accuse him of racism. In fact, he makes his point much more clearly in the sentence before this one: “The reason I and some of my colleagues [support] this program isn’t because we’re trying to give relief to people that aren’t responsible, that don’t know what the hell they’re doing, or care what they’re doing.”

That said, the road to Hell is paved with good intentions, or something like that. Overtly racializing an issue– no matter how covertly it may already have been so– on a day where Republicans have been gaffing all over the place and getting caught (thanks, soundbite-happy, hyper-partisan, YouTube-obsessed American political culture!), is just asking for trouble. Exhibit A: Chris Matthews, who interrupted a successful night for the Democrats after this year’s State of the Union speech to “forget Obama was black,” and thus give Republicans a target to shoot at on a night where they were expected to mostly keep a low profile.

Race is a tricky issue and it’s almost impossible to come out of bringing it up unscathed, and in this political climate, putting the words “minorities” and “defective” anywhere near each other is a bit of a risk. But ultimately it’s intent that matters, and considering the soundbites coming out of his colleagues on the right, Kanjorski is actually going to have to try to say something off-color for it to catch on in the mainstream. Video of Rep. Kanjorski’s comments below: