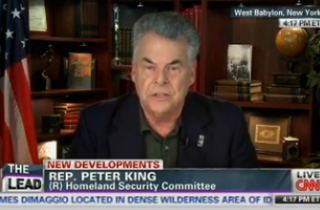 During President Obama‘s big press conference today, even with all the promises of better NSA oversight, not once did Obama say the programs are too broad and should be reigned in. But the concessions he did make were too much for Republican congressman Peter King, who appeared on CNN following the press conference to slam the president’s “NSA version of the apology talk,” charging that by doing this in response to Edward Snowden‘s leaks, he’s allowing a “traitor to pull the puppet strings.”

King found it striking how Obama’s been “AWOL” on defending the NSA programs since the initial revelations two months ago. He mocked the idea of a task force to look into it, stating bluntly, “We’re at war” and Snowden “revealed secrets and putting the country at risk.” He also said it’s odd how Obama managed to muster more anger over Republican obstruction than over a “traitor.”

King allowed that Obama’s been a “good leader on the NSA” but “now he seems to be in retreat.” CNN’s John Berman pushed back a little, saying in Obama’s outline of changes he wants to bring to the NSA, there’s “nothing in there that aggressively calls for massive changes in the surveillance program.” King maintained the president should be “aggressively defending it,” and not doing so represents a “failure of leadership.”