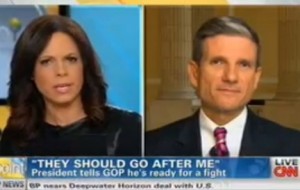 Unless this turns out to be a very long, very stupid day, this segment from Thursday morning’s Starting Point has to be the WTF Clip Of The Day. Congressman Joe Heck (R-NV), as in “Heck if I know what he’s talking about,” appeared on CNN’s morning show to talk about hearings on the Benghazi attacks of Sept. 11, but jumped the tracks when host Soledad O’Brien asked him to defend the despicable scapegoating of U.S. Ambassador to the United Nations Susan Rice. O’Brien asked Heck if he agreed with Sens. John McCain and Lindsey Graham that any potential Rice nomination should be blocked, and he replied with some sort of reverse Jedi mind trick that ended with a weird pseudo-defense of Ambassador Rice.

“We’re trying to get all the information on the attacks in Benghazi, and a clear time line,” Rep. Heck replied. “There’s still a lot of conflict between what the administration and intelligence community are saying on how this attack evolved. We need to have full accountability of the administration, intelligence community. We need to have answers and transparency for the American people, and certainly for the families of those who were lost.”

So far, so good. With his “information, answers,” and “transparency,” Rep. Heck had demonstrated his ability to recite the dictionary definition of “hearing.” Then, things got tricky.

“We know that John McCain and Lindsey Graham, both Senators, have said they will try to scuttle any nomination if that would happen,” Soledad said. “Would you support that scuttling?”

Heck responded, “You can’t put somebody out as the face of the issue on all the Sunday morning talk shows, and turn around weeks later and say she knew nothing about the incident, had nothing to do with it. That is just plainly wrong. You don’t put somebody out who doesn’t know about the issue and have them go out to feed us the information that the administration wants put out. So we have to get to the bottom of what happened in Benghazi, and certainly the Senate will hold confirmation hearings, if she’s nominated.”

Heck didn’t really answer the question that was asked of him, but an observer could make the reasonable inference that he’s not a Dr. Rice booster.

“Isn’t that exactly analagous of what happened to Condoleezza Rice, who John McCain supported, and who Lindsey Graham supported?” Soledad asked.

Heck then proceeded to explain that they’re not the same, because “Condi Rice was in the position to be able to be the face. The information was wrong,” whereas with Susan Rice, “we had wrong information, and weeks later the administration was coming back saying this person had nothing to do with the situation.”

So, it’s different because what Condoleezza Rice did was worse? That sounds like what he was saying. The difference is that Condoleezza Rice helped lead the U.S. into the Iraq War by disseminating bad intelligence about which she was in a position to know better, whereas Susan Rice had nothing to do with Benghazi, save delivering exactly what intelligence sources were telling the administration at the time. But that can’t be right.

“Let’s walk through that more slowly — let me walk through that more slowly so you don’t lose me,” O’Brien replied. “You’re saying the issue in both cases, weapons of mass destruction and information intelligence coming to the U.S. Ambassador Susan Rice, both cases the information was wrong. What you take exception with is what the White House did later?”

Soledad took another run at Heck, before pleading with panelist Charles Blow for help. “Charles Blow, help me. forgive me. I’m not being facetious at all. He is saying nobody said Condoleezza Rice didn’t have anything to do with the situation.”

“What I’m trying to figure out,” Blow said, “is, are you saying that Condoleezza Rice actually should have known, because she had more intimacy with the information and then still said something that she knew was wrong and then, in fact, Susan Rice is a sacrificial lamb because she was put out as the face of the administration but didn’t know anything? Matter of fact, it’s more of a defense of Susan Rice than it is a condemnation of Susan Rice.”

That’s how it sounds to me, too, and anyone else with marginal fluency in English.

O’Brien took one more stab at summarizing Heck’s point. “I feel like you’re saying, from your own comments, that Susan Rice had nothing to do with either of those things. She didn’t have something to do with the intelligence failures, which I believe you just said. And it looks as if she had no knowledge at the time,” Soledad said, asking “Why would you possibly blame her then?

“I’m not blaming Ambassador Rice,” Heck replied, as O’Brien miraculously controlled the urge to smash her own forehead into the desk.

Here’s what actually went on in this interview. Rep. Heck realized, early on, that there was no good reason for John McCain and Lindsey Graham to scapegoat Susan Rice, but instead of just saying that, he tried to invent an alternate question for himself to answer, the premise of which is that no one should ever go on a news program unless they have direct knowledge of the subject matter, which would eliminate 98% of all news programming. All government agencies and branches send spokespeople onto TV shows to discuss events they have been briefed on, but haven’t necessarily participated in. It’s Tee-Vee, not sworn testimony.

It’s a ridiculous premise, and even if it weren’t, Ambassador Susan Rice clearly labeled her information, on every one of the Sunday shows on which she appeared Sept. 16, as “the best information we have at present,” which it actually was. Whatever the problems end up being with that information, after the Benghazi investigations are all complete, they would have been no different had Jay Carney, or President Obama himself, gone on those shows.