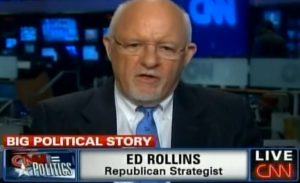 Veteran Republican campaign consultant and advisor Ed Rollins has had it up to here with Sarah Palin comparing herself to his old boss, Ronald Reagan. In a piece published on CNN.com today, Rollins expresses his feelings about those comparisons plainly: “I knew Ronald Reagan, and you’re no Ronald Reagan.”

Like other Palin critics, Rollins thinks that Palin is “a media star and a great curiosity” rather than a great politician. He addresses the ex-governor directly in the piece, chiding her credentials (“I would have hoped somewhere along the way through the five colleges you attended that you would have learned a little history”) and criticizing the path she’s taken to a possible presidential run:

You were plucked out of political obscurity because of the whim of presidential contender John McCain, who didn’t know you and made you into an overnight sensation. You performed well for three weeks in the campaign, did better than expected against Joe Biden in the debate and then you self-destructed.

You clearly weren’t ready for prime time, but neither was your running mate. After the election, you quit your day job as governor of Alaska with 18 months left in the term and went out and made a fortune making speeches and selling a book.

It was certainly your right, and you’re not the first one to cash in on fame. Millions of Americans love you, and I am sure millions more hate you. Unfortunately, that’s what happens in politics.

You can be a contender for the Republican nomination in 2012, but you’re a long way from being the nominee. You’re going to have to beat some very formidable candidates with way more experience and far superior knowledge on issues foreign and domestic. And to rate your chances today, I would put them at “possible” but not “probable.” It’s an all-uphill battle.

And the Reagan comparisons aren’t helping. You might as well compare yourself to Abraham Lincoln or Teddy Roosevelt.

Rollins then lays out the differences between the Gipper and the Mama Grizzly. Palin, for example, has never starred in a feature film. Oh, and Reagan also helped to move the GOP forward in a way that Palin hasn’t yet:

He rebuilt the Republican Party after Watergate, the resignation of Richard Nixon and the defeat of Gerald Ford in 1976.

He won two electoral landslides and made the presidency work again after several failed presidencies. He also never quit anything or any job before he was done. And he was a great communicator because he not only made great speeches, he wrote many of them because it was what he believed. People listened to them and were moved by them.

It should be noted that Rollins is a supporter and onetime employee of Mike Huckabee—meaning that his words should be taken with an entire shaker of salt. Even so, he argues well, both in this piece and in the clip below, in which he explains his remarks to CNN’s John King. Read Rollins’s whole note at CNN.com.