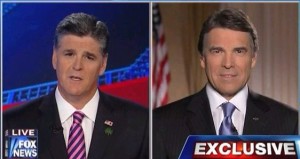 Perry kicked things off by saying that he’s the right candidate for voters because he’s not some sort of “Obama-lite:”

This election is about the future of America and who’s going to get America back working again and I think I can handle that part of the job creation side of it as well as anyone who’s going to be on that stage tomorrow night.

Hannity joked that calling a nominee an “Obama-lite” is pretty damning (which Perry seemed to quite enjoy). Perry added that some of the candidates seem indistinguishable from Obama, even bringing out the big guns by referring to rival and former Massachusetts Governor Mitt Romney‘s state health care plan as “RomneyCare,” comparing it to “ObamaCare” and calling it the wrong decision for Massachusetts.

Hannity then changed the subject to the issue of Social Security which, you’ll likely recall, Perry rather notoriously referred to as a “Ponzi scheme.”

The most important issue is that anyone who’s on Social Security, is approaching Social Security age and have made plans for their retirement with that Social Security in mind, it will be there for them. And for anyone to say that it’s different than that is… You know, that’s the old tactic that the Democrats used back through the years to try to scare the senior citizens, and that’s irresponsible. If anyone on that stage that’s a Republican and wants to be a Republican nominee is trying to scare our seniors with this issue that somehow or another I’m going to do away with Social Security, that’s just not appropriate, it’s irresponsible.

Here’s what we know: That the program as it is set up today is not going to be viable in the future for our young people. And those kids know what a Ponzi scheme is — it’s your paying into something and it’s going to be the ones that pay in first and there’s not a payout for them when their time comes. Kids know that. Twenty-five to 36 years olds know that that program is not going to be in place. So let’s have a grown up conversation.

He added that there needs to be a conversation about the possibility of introducing a different system in the future or changing the age at which one can collect Social Security benefits. To which Hannity quipped that he’ll live a lot longer than liberals would like.

Have a look at the video, from Fox News: