Ron Paul: Not Sure I Can Support Another GOP Nominee
video

Ron Paul: Not Sure I Can Support Another GOP Nominee 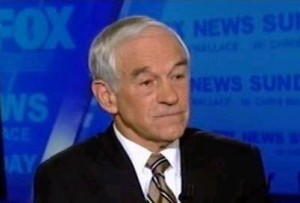 Ron Paul continues to make the case that he would be a good conservative challenger to President Obama in next year’s election, but as the congressman explained on Fox News Sunday today, he would be reluctant to support anyone else for the Republican nomination without first making sure they agreed with his principles of limited government.

Chris Wallace asked Paul to respond to speculation that if he does not win the Republican presidential nomination, he will end up running as a third-party candidate for the presidency in 2012. Paul almost certainly ruled out the possibility, but also admitted that it would be hard for him to support any of his rivals should they get the nomination.

Paul explained he would also take into consideration his own supporters and who they would want him to throw his weight behind in the general election.

Wallace took the opportunity to ask the congressman again if this meant he was even remotely considering a third-party independent bid. Paul did not give a flat-out “no” to the question, but stated for the time being he has “no intention” of pursuing that particular course of action.