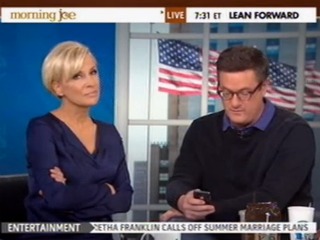 On Tuesday’s Morning Joe, host Joe Scarborough took a moment to speak with GOP presidential hopeful Rick Santorum, whom he’s known for some time. Santorum told the host he was gearing up to visit his old stomping grounds in Pensacola, Florida.

Host Mika Brzezinski had a playful moment at the expense of Pensacola mayor Ashton Hayward. As Mayor Hayward’s name might suggest, the man looks like he’d be perfectly comfortable playing “handsome high school guidance counselor” on a CW show. “He has very white teeth,” she told Santorum. “They sparkle.”

Scarborough then shared a fun little moment with Santorum:

“A little-known fact,” Scarborough began telling Brzezinski, “When I first ran for congress in 1994, Joe Gaylord gave me Rick Santorum’s plan when he ran in 1990. I was the first Republican elected in my district since 1872; Rick was in the swing district. And I followed it. So these Pensacola people are going to absolutely love you.”

“I’ll never forget, Joe,” said Santorum, “the first day that it was, we came back for a NAFTA vote and you were in a training session on the floor of the House. And I walked into the well of the House and this big guy comes running down the center aisle, pointed his finger saying ‘I’m here because of you!’ I’ll never forget that. I’ve now had to apologize to several people because of that. But, nevertheless.”

Later, Mayor Hayward texted Scarborough, joking that he would fly up to NYC to confront Mika. Brzezinski didn’t miss a beat. “I’m not worried,” she said. “He’d have to leave his mirror.”