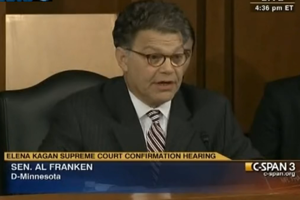 While the media has spent most of Elena Kagan‘s Supreme Court hearings fishing for the most entertaining tidbits (not an easy feat), parts of the substantive discussion that weren’t about Twilight were fascinating, too. Today, Minnesota Senator Al Franken posed to Kagan challenging questions about the state of the media, and gauged her comfort level with major media mergers like the proposed one between Comcast and NBC Universal.

Franken did not make his opinion of the matter at all vague, explaining that, to him, “when the same company owns programming and runs the pipes that bring us programming, I think we have a problem. I’m interested in the ways the Supreme Court affects the info that you and I get when you turn on the TV or read the newspaper.” He continued his explanation, before asking Kagan’s opinion directly:

“If Comcast and NBC merge, I worry that AT&T and Verizon are going to decide that, well, they have to buy ABC, CBS to compete. And that will mean there will be less independent programming, fewer voices, and a smaller marketplace of ideas. That’s a First Amendment problem. It’s also an anti-trust problem.”