Sen. Lindsey Graham: Iraq And Afghanistan ‘Being Run Out Of Chicago, Not Washington’
video

Sen. Lindsey Graham: Iraq And Afghanistan ‘Being Run Out Of Chicago, Not Washington’ 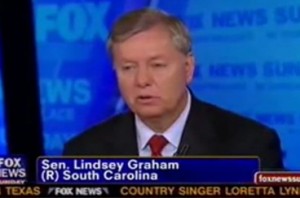 Graham also beat the familiar drum that “Israel has been thrown under the bus” by the administration, falsely claiming that the President’s “standing in the state of Israel is very low,” despite the fact that 81% of Israelis approve of his policies.

Wallace pushed back against Graham’s criticisms of the President’s foreign policy, asking, “What about the argument that, in the last six months, bin Laden is gone, Awlaki is gone, and now Gaddafi is gone?”

Graham conceded that the killings of bin Laden and al-Awlaki were “Well done,” but accused the President of failing to “close the deal” in Iraq. Graham insisted that it “was not clear” that the Iraqis wanted the US out, but couldn’t explain why they refused to grant US troops immunity in Iraqi courts. “The Iraqis were, in my view, open minded to this. This was a failure by the Obama administration to close the deal.”

Wallace also asked Graham about his criticism of the President’s actions in Libya. He told Graham that the administration points out they ousted Gaddafi “without the loss of a single american soldier, and it cost about a billion dollars, as opposed to the $805 billion in Iraq. Was the President right, and critics like yourself wrong?”

Graham’s suggestion that the President’s foreign policy is somehow guided by electoral politics is absurd on its face. If there was any way to make the 2012 election about national security, President Obama would win in a cakewalk, but that’s not going to happen. With the economy at numbers one through ten on Americans’ list of priorities, fixing foreign policy around a reelection bid would be foolish, and fruitless. As we saw after the killing of Osama bin Laden, all Republicans can do with the President’s foreign policy successes is to try and soften them.