Soundbite: At Least Now All The Evening News Anchors Are Attractive 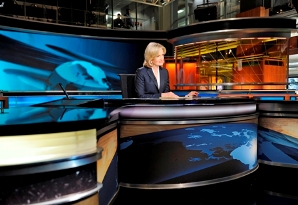 “…Brian Williams has spent much of his tenure at “NBC Nightly News” as a young Turk competing against two older, avuncular and laid-back newsmen, Mr. Gibson and Bob Schieffer of CBS, who filled in after Mr. Rather left his post ahead of schedule. With Ms. Sawyer’s arrival, the three network anchors are evenly matched in looks and take-charge personality.

— The New York Times‘ TV Critic Alessandra Stanley weighs in on the debut of Diane Sawyer.

Stanley’s takeaway from the move is that Sawyer taking over for Charlie Gibson means she, Katie Couric and Brian Williams are now “evenly matched in looks and take-charge personality.” Also, from earlier in the column: “Ms. Sawyer appears to have the same high-octane drive and ambition as Brian Williams and Katie Couric.”

Besides the clear shots at Gibson – what, was he just sitting in the anchor seat half-asleep every night? – the drive and take-charge personality could be argued for each anchor. But what exactly does “evenly matched in looks” even mean? But more importantly, how would (and should) it ever be relevant?

Much of Stanley’s piece was spent praising Sawyer on her interview with Iranian Pres. Mahmoud Ahmadinejad, which was the centerpiece of her debut show. Stanley took it to the next step, writing that the first night suggests Sawyer “seems intent on exotic travel and big ‘gets.'”

There also seems to be one clearly incorrect part of the column (which follows the path of her reputation). Stanley writes Brian Williams “has spent much of his tenure…competing against two older, avuncular and laid-back newsmen, Mr. Gibson and Bob Schieffer of CBS.”

This is there to make the point about the ‘new breed’ of anchors, now that Gibson is gone. But this characterization of Williams’ competition doesn’t add up. Williams took over NBC Nightly News in December 2004. He competed against Dan Rather at CBS until March 2005, then Schieffer after that. But only until August 2006, when Couric took the chair. So Williams has spent much of his tenure competing against Couric, and not one of those “older, avuncular” types.