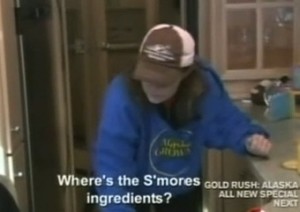 Just last week, former Alaska Governor Sarah Palin took justified exception at the media’s petty sniping over her visit to Haiti, when she was just trying to do some good. In a neat, if predictable, reversal, Sarah Palin took to sniping at First Lady Michelle Obama‘s attempt to fight childhood obesity. On the latest episode of Sarah Palin’s Alaska, Palin roots around for the three ingredients for S’mores (a list that conveniently fits on the palm of her hand), and dedicates the snack to Michelle Obama “who said the other day we should not have dessert.”

This isn’t Palin’s first foray into snacktivism, and it probably won’t be the last, but what’s the big frickin’ deal?

Here’s the clip, from TLC:

Now, it’s true that Michelle Obama never flatly declared that “we should not have dessert,” but then again, Sarah Palin never actually said “I can see Russia from my house,” so let’s call that a wash. The First Lady did say that dessert wasn’t a right (in her mother’s house), but a strict constructionist like Palin shouldn’t have a problem with that.


Given that Palin’s a member of a party whose idea of healthin’ up school lunches is to classify ketchup as a vegetable, none of this should surprise anyone.

In further fairness to Palin, she’s certainly not the only right-winger to see the First Lady’s “Let’s Move” initiative as anything from a grievous insult to a commie plot, and attacking Michelle Obama for daring to eat stuff. See, if you try to make information available about healthy eating, that means you must never, ever haz cheeseburger!

The funny thing is, I don’t remember anyone saying a peep about the Presidential Fitness Awards when I was a kid. I know, because I thought they were effing stupid. What is the point of doing 125 sit-ups? After about the first five, I had pretty much mastered the skill. To this day, no one has been able to explain to me the practical application of the jumping jack. I’ve been waiting my entire life to be surprise-attacked, simultaneously, by a pair of cockroaches and a divebombing mosquito, but it hasn’t happened yet. When it does, though, I’ve got Ralph Macchio beat all to hell.

Still, after my gym teacher said I could pretend that the wood blocks for the shuttle run were high explosives if I “really needed to,” I did it. Why? Because what’s the harm, and I got a cool patch at the end. The patch got thrown into a pile of other patches that would never get sewn to anything, but it was still pretty cool.

In  all that time, though, I don’t recall anyone accusing Presidents Ford, Carter, or Reagan of trying to usurp parental authority, or engage in some sort of cultural elitism, or criticizing them for not doing any chin-ups, ever!

Granted, the President’s Council on Fitness and Sports has now been expanded to include nutrition, but I fail to see how that elevates this from innocuous feel-good policy to DefCon Evil. The Information Age has made our children’s lives more and more sedentary, and so the occasional apple-for-Ring-Ding swap is not the liberty-crushing fist of oppression that Sarah Palin thinks it is.

There will always be overreaches in one direction (Happy Meal bans) or another (the imaginary Skinwich’s real-life cousin, the Double-Down), but those are largely self-correcting.Letting people know what’s in their food, keeping poison out of it, and making sure our public schools have a healthy selection of it are reasonable expectations of our government. We still retain the right to have our Butterscotch Krimpets pried from our cold, dead, greasy fingers.