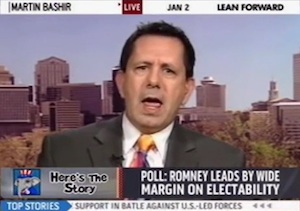 “Never!” Phillips reiterated. “I think I told you this before, we’ve done surveys on our site where it shows one third to one half of the Tea Party members will not vote for Mitt Romney if he is the nominee in the general election — which is probably going to encourage Team Obama to send out people to vote for Romney in the primaries. But Iowa is the first step in this whole process. A week from now we will be talking about New Hampshire, two weeks from now, we’ll be talking about South Carolina and three weeks from now we will talk about Florida.”

“In all the national polls, Newt Gingrich is still right up there at the top,” Phllips added. “He does well in South Carolina and Florida, of course, the other good news that will be coming out of this is at least one candidate is going to dropout. Since the conservative vote is so fragmented right now, whoever drops out, presumably Bachmann, her supporters are going to somewhere. Hopefully from my point of view, it will be Newt. Wherever they go, they’re going to help one of the conservative candidates.”

Phillips later said as the race goes on, we will see “this coalescing and it will be around Newt Gingrich. It will happen. Eventually it will send Mitt Romney to the showers.”

Watch Phillips trash Romney on Martin Bashir below via MSNBC: