The Five’s Bolling and Beckel in Heated Battle Over Oklahoma Shooting, Gun Laws 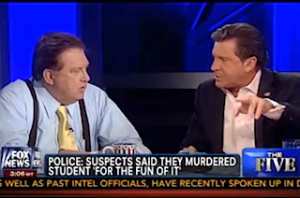 Just one hour after MSNBC’s Joy Reid examined the right’s attempts to make the Chris Lane shooting a “racial” issue, Fox News’ The Five took on the left for making it about guns. Eric Bolling wondered “how long before one of these bozos on the left starts pointing the finger at the NRA,” before Bob Beckel jumped in with, “I’ll do it right now.”

The hosts could all agree that the three teenagers who claim to have killed the Australian baseball player out of “boredom” should be locked up for the rest of their lives. “These three punks murdered him for the sport of it,” Bolling said “They should never see the light of day again. they’ve lost the right to walk free among us. They have obviously no heart, no conscience, no soul. Lock them up, throw away the key.”

At this point, Bolling said the real question is why Al Sharpton and President Obama have not yet spoken out against the shooting the way they did for Trayvon Martin. He also asked, “Where’s the media? They’ve spent more time on Obama’s new dog than they have on this case.”

Beckel commiserated with the outraged reaction from Lane’s native Australia, but said it’s not just that country that doesn’t understand American culture when it comes to guns. “People in the civilized world do not understand when you hand out guns to everybody and people are killed,” he said. “They don’t get it and I don’t get it either.”

After Bolling brought up the NRA, Beckel said “This could not have happened in Australia” because “they have very strict gun laws.” He said, “these guns are going around, they’re illegal, they’re finding their way in the hands of kids like this, and that’s because they won’t have strict gun control laws.”

When Bolling challenged his notion, saying it would have been illegal for the teenagers to possess guns even without stricter laws, Beckel replied, “If we didn’t have handguns, we wouldn’t have that problem.”

“Guns aren’t the problem,” Brian Kilmeade countered. “This behavior is killing somebody and laughing about it, saying I was bored, and not understanding what they’re saying. That’s the issue. Guns are so far removed from the problem.”

Beckel said he understood, “but you take the evil personalities like these guys, put a lethal weapon in their hands, you’re going to have this kind of thing happen.”