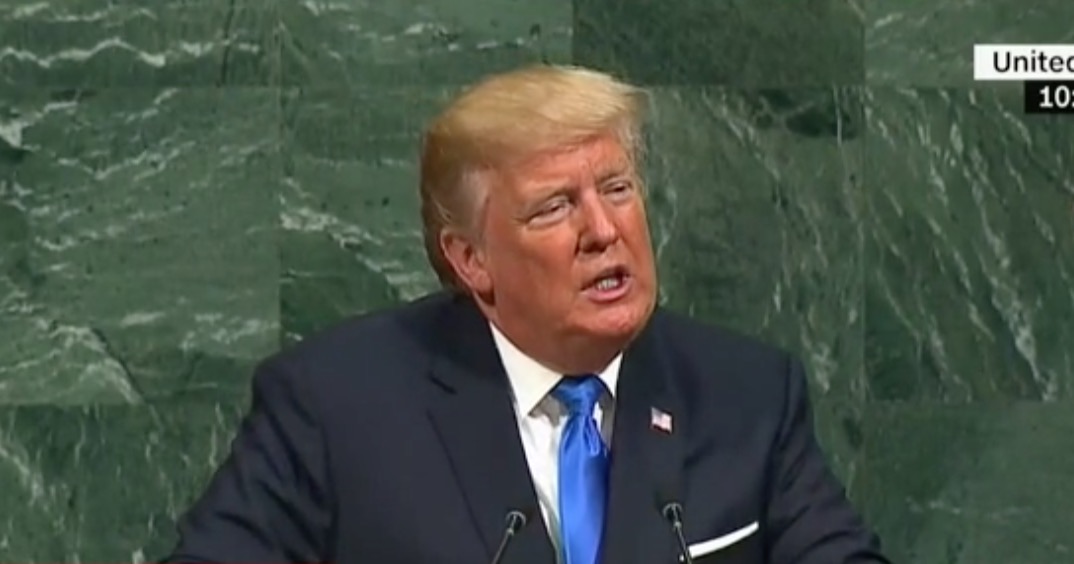 President Trump spoke for the first time at the United Nations and while he touched on many things like the “embarrassment” Iran Deal and the “faithfully-implimented” socialism that’s destroying Venezuela, much of the attention went to his remarks on North Korea.

Trump called North Korea a “depraved regime” that’s responsible for the starvation and deaths of millions of people and invoked Otto Warmbier, American college student who died earlier this year shortly after being released from imprisonment.

He then said this:

“It is an outrage that some nations would not only trade with such a regime, but would arm, supply and financially support a country that imperils the world with nuclear conflict. no nation on earth has an interest in arm itself with nuclear weapons and missiles. The United States has great strength and patience, but if it is forced to defend itself or its allies, we will have no choice but to totally destroy North Korea. Rocket Man is on a suicide mission for himself and for his regime. The United States is ready, willing and able, but hopefully, this will not be necessary. That’s what the United Nations is all about. That’s what the United Nations is for. Let’s see how they do. It is time for North Korea to realize that the denuclearization is its only acceptable future.”

Trump went on to praise the members of the UN Security Council for increasing sanctions on North Korea and urged the world to isolate the Kim Jong-un regime until it stops its hostile behavior.

In other words, Trump called our allies to unite against North Korea and if they decide to attack the U.S. or an ally, North Korea would sorely regret it. Aside from calling Kim Jong-un “Rocket Man,” that’s far from being an irrational position, yet the media interpreted what he said essentially as a declaration of war.

ABC News’ Terry Moran accused Trump of “threatening to commit war crimes” in his speech. The View‘s Joy Behar freaked out that Trump talked about “annihilating millions of people.” CNN’s Jim Acosta called it “jaw-dropping.” Slate‘s Fred Kaplan said he used his “America First” doctrine to “justify deranged hostility towards our enemies.” The Washington Post‘s Aaron Blake called his threat to “wipe out” 25 million people “extraordinary.” USA Today called his remarks “unsettling” and “apocalyptic.” And MSNBC’s Col. Lawrence Wilkerson called it the “most atrocious speech” he’s “ever heard an American president give in any venue.”

My goodness, the sky is falling!

The media acts as if this tough talk on North Korea is new but it isn’t. Press Secretary Sarah Huckabee Sanders invoked President Obama‘s remarks that we could “obviously destroy North Korea with our arsenals,” which was more of a hypothetical than as an actual threat, but there was another instance when he said that we would “not hesitate to use our military might” on North Korea in order to “defend allies and our way of life.”  And back in 1994, President Clinton said if North Korea used nuclear weapons, “it would mean the end of their country.”

Did Terry Moran accuse them of “threatening to commit war crimes?” I don’t think so.

What’s really remarkable is the hypocrisy of the media. In May, they hammered Trump for not reaffirming the country’s commitment to Article 5 of NATO, which most people recall is “an attack on one ally is an attack on all.” While Japan for example isn’t a NATO member, they’re certainly an ally. And with North Korea flying multiple missiles over that country, they’re relying on U.S. leadership now more than ever. So yesterday, Trump basically extended our NATO policy towards our allies in Asia when he said that if the United States is “forced to defend itself or its allies, we will have no choice but to totally destroy North Korea.”

The media can’t have it both ways. They can’t express moral outrage when Trump doesn’t defend our allies and then express moral outrage when he does. This inconsistent condemnation speaks more to their disdain for the president than their sensational stupidity. This is just the latest example that no matter what Trump does, it is impossible for him to please his critics simply because they hate his guts, which only feeds into the media’s own credibility problem.

If the media wants to dispel the myth that they’re “fake news,” they ought to cut the crap.